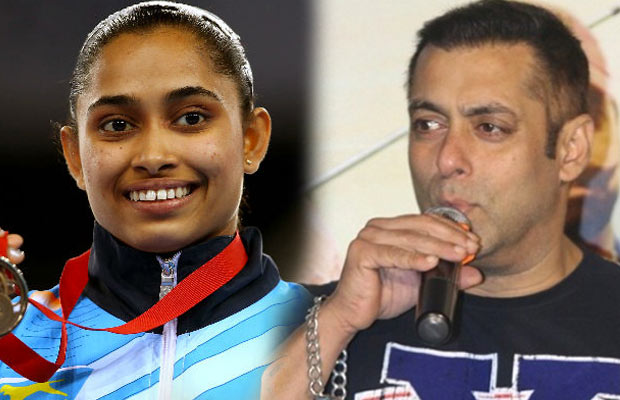 [tps_footer]Salman Khan has yet again landed in a big goof up. The actor who is always in the limelight for his statements and opinions has now irked everyone again. Salman is chosen as the Goodwill ambassador by the Indian Olympics Association. For the first time, the masses are all updated about the Olympics which are being held in Rio.

Gymnast Dipa Karmakar is now a household name in the country thanks to her mind blowing qualification for the vault event. Dipa is the first Indian to qualify for the stated. The talented girl has created history for India and people cannot stop praising her.

Seems like, Salman Khan is not very much aware of the ongoing! Despite being the Goodwill ambassador for the Olympics, the superstar forgot the name of Dipa Karmakar. At the trailer launch of brother Sohail Khan’s film ‘Freaky Ali’, Salman made a big blunder.

The Dabangg actor was asked at the trailer launch as to which athlete is he looking forward to and which sport. On replying to the same Salman Khan stated, “I thought… it was… was it Deepika? I thought she was going to win gold but she came eighth, no? Oh yeah, Deepti.”

Well, the actor also failed to recall Nawazuddin Siddiqui’s name when launching the trailer. The Sultan actor who has shared screen space with Nawazuddin in the films ‘Kick’ and ‘Bajrangi Bhaijaan’ introduced him as Nawazuddin Shah!

Salman was recently entangled in a trouble for his raped woman comment and again the actor has let down his fans by saying the wrong name.

On the film front, Salman will be seen in Kabir Khan’s ‘Tubelight’ which is being shot in Ladakh.