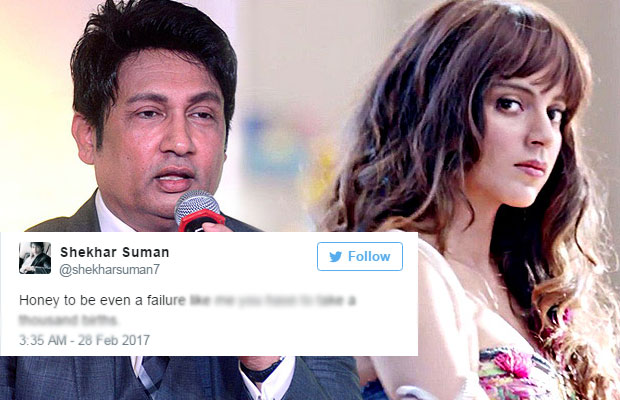 Last year Kangana Ranaut’s ex-boyfriend Adhyayan Suman had accused her of torturing him and also made some revelations about practicing black magic on him. Well, it looks like some wounds don’t heal fast and the scars remain forever. Adhyayan Suman’s father Shekhar Suman, who is currently shooting for Bhoomi with Sanjay Dutt took to his Twitter handle and tweeted something that refers to Kangana Ranaut and Rangoon failure.

In the series of tweets, Shekhar tweeted, “One co*ained actress was carrying the burden of her non existent stardom. She has fallen flat on her face n how. Guess this is poetic justice.”

A few hours later, he again tweeted, “I’m horrified at the paid lackeys and sycophants who have jumped in defence of a lumpen so-called star. Shame on you, you paid twitteratis.”

Im horrified at the paid lackeys and sycophants who have jumped in defence of a lumpen so- called star.shame on you,you paid twitteratis.

He also went ahead to write that he did not mention anyone’s name in the tweet and also tweeted, “The game begins now”?

I meant smone totally different but i guess guilty minds are forever conscious.plz don’t jump to conclusions.i never named no one.

No one is mocking no one.just chill.The game begins now.?

Honey to be even a failure like me you have to take a thousand births.

Going back to Hrithik Roshan controversy, Shekhar Suman had made some shocking statements about Kangana Ranaut and how she destroyed his son’s life and career. He spoke to media, “I called family’s panditji and they confirmed that Adhyayan was hypnotised. From his eyes it seemed either he was dru*ged or was under the influence of someone.

Kangana took Adhyayan to Filmfare awards, but Adhyayan was falling back 15 feet from Kangana as though he was some bodyguard to her. She was giving interviews and he was standing behind her. I felt so horrible for my son; I must have died thousand deaths. She didn’t even look at him. Eventually, when she went on stage she thanked everyone except Adhyayan.”

Now it remains to see how Kangana Ranaut hits back this time!