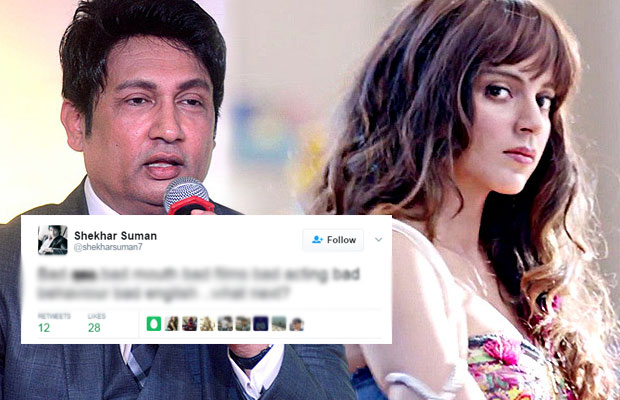 Two weeks after the episode was aired, Karan Johar, at the London School of Economics, reacted to Kangana’s allegations. This has that left everyone shocked. Karan Johar said, “I am done” with Kangana Ranaut playing a victim all the time. He suggested that if she has so many problems with the industry, she may “leave it.”

However, he resorted to saying that she wasn’t entirely correct and that it was fun having her on the show. He even went on to say that Kangana should leave the industry if she has a problem.

Amid everything, Shekhar Suman has jumped into the fray. He has taken the chance of the ongoing war to remove his personal grudges with the actress. Once again Kangana’s former boyfriend Adhyayan Suman’s father had taken pot-shots at the actress. He has asked her to shut her mouth.

Yes, Shekhar Suman in a recent interview said that Kangana should keep her mouth shut. He also said that she should have the dignity to accept failure. Shekhar further said that he does not like weeping women. And Kangana cries to everyone to claim that she is victimized and traumatized.

Check out what he tweeted on the recent comments of Kangana Ranaut on Karan Johar:

In the latest diatribe on Twitter, Shekhar had written something. He wrote, “One co*ained actress was carrying the burden of her non existent stardom. She has fallen flat on her face n how. Guess this is poetic justice.” He had later said he didn’t mean Kangana.

We wonder what would be Kangana’s reaction to this!