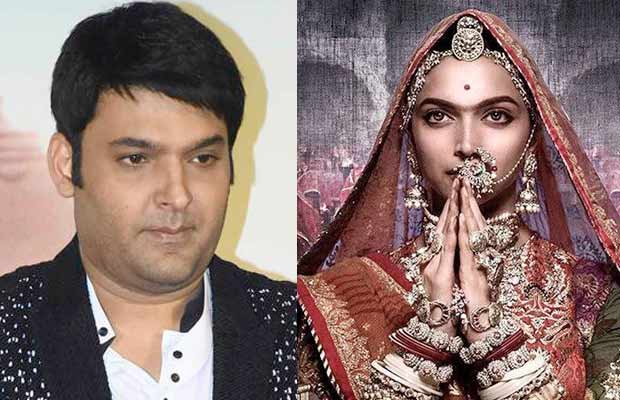 Comedian turned actor Kapil Sharma has spoken in support of ‘Padmavati’, says that ‘artists are not at any fault’.

Everyday ‘Padmavati’ is falling in a new controversy. Politicians and religious groups are against the release of the film. But, Bollywood and television fraternity stand firmly in support of Sanjay Leela Bhansali directed ‘Padmavati’. Kapil Sharma now joins the group.

Recently, Kapil was in Delhi to promote his second Bollywood project Rajiev Dhingra directed ‘Firangi’. Kapil said while everyone has a right to express their opinions in our democratic country but threats cannot be made under any condition.

Talking to ANI about the ‘Padmavati’ controversy, The Kapil Sharma Show host said, “Nobody has seen the Padmavati yet and I feel Censor Board is there is to look up into the matter. If there is anything objectable, then the board keeping in mind the sentiments of people, should remove it. I strongly condemn death threats given to artists. Artists are not at any fault, they just do their work,”

The death threats by fringe group— Rajput Karni Sena were made to director Sanjay Leela Bhansali and Bollywood actress Deepika Padukone. Since then the security given to both has been increased. Even Deepika’s Bangalore family home is under police security.

It all started with the reports of an alleged dream sequence being filmed between Queen Padmini (Deepika Padukone) and Alauddin Khilji (Ranveer Singh). The makers have also been accused of distorting history and hurting Rajput sentiments in the film. Despite reassurance by Sanjay Leela Bhansali, the film is still surrounded by the murky waters. Padmavati Row: Uttar Pradesh CM Yogi Adityanath Calls Sanjay Leela Bhansali Guilty
Weeks leading up to the supposed release of ‘Padmavati’ have been tough for the movie. The movie has been banned in five states of the country with many states still contemplating a ban. The release date is not clear as the movie has been sent back for reviewing to the CBFC. However, if ‘Padmavati’ was releasing on its initial release date— December 1, it would have clashed with Kapil Sharma and Ishita Dutt starrer ‘Firangi’.