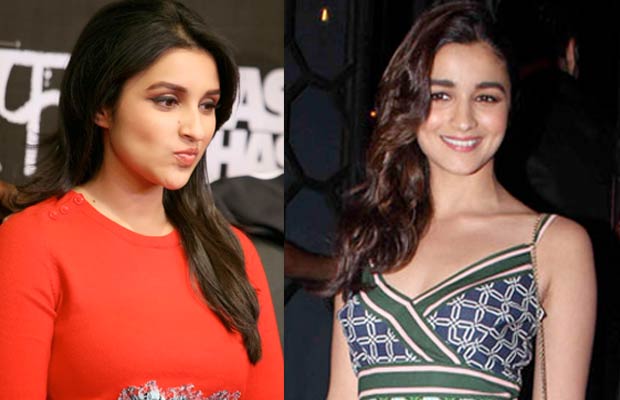 [tps_footer]Parineeti Chopra is back in the forefront after a yearlong break from the silver screen. The chirpy actress who has loads of fans was out of the limelight for her mind-blowing transformation. Parineeti who has already done a variety of roles in the tinsel town has now said something about her competitor Alia Bhatt. Alia and Parineeti both are credible divas of B-Town but Alia has surely raced ahead with her back to back hits.

Recently, while talking about her choice of films and Alia Bhatt, Parineeti made an interesting comment. Alia has gained loads of fans with her recent performance in the film ‘Udta Punjab’, Chopra on the same stated that her set of films have also been equally varied and worth.

Talking about her career the Ishaqzaade actress stated, “She (Alia Bhatt) did those films, but I did them right at the start of my career. I did Ishaqzaade (2012) and won the National Award for that. The kind of films she started with… things like Student of the Year (2012) or Kapoor and Sons, are the kind of films I’m doing now.”

The cute looking actress also shared about competing against Alia Bhatt, Deepika Padukone, and sister Priyanka Chopra. The happy go lucky actress expressed, “This (other actors delivering hit films) keeps me on my toes. It makes me work harder and do as well as them. There is no negativity.”

Well, the Daawat-e-Ishq star was quick enough to cover up her rivalry with Alia Bhatt and Shraddha Kapoor saying, “I knew Alia before her first film released, and Shraddha even before she started acting. Our friendship really helps. It only means more encouragement for each other. And even if there is competition, it is healthy.”

Parineeti Chopra on the film front will soon be seen in the rom-com ‘Meri Pyaari Bindu’. The movie stars actor Ayushmann Khurrana in the main lead.