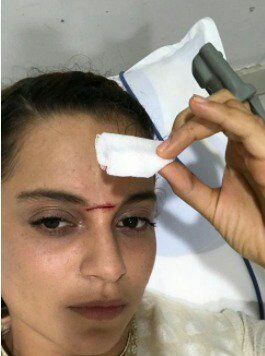 Bollywood actress Kangana Ranaut escaped a fatal accident on the sets of her next, Manikarnika – The Queen of Jhansi. As per media reports, during the sword fighting scene with co-star Nihar Pandya, the actress hurt her face and it started bleeding profusely. The actress didn’t duck at the timing when Nihar raised his sword to attack but she didn’t, which hit Kangana’s head.

Reportedly, Kangana Ranaut was immediately rushed to Apollo hospital and has got 15 stitches on her forehead. The actress will be kept under observation for few days and moreover, it’s great to know that Kangana escaped a big accident as the cut on her head is too close to the bone.

Kangana refused for body double and wanted to do all the stunts on her own as she has been taking sword-fighting lessons from Hollywood action director Nick Powell and is leaving no stone unturned to put her best.

Earlier this year, Kangana has unveiled the first poster of the film at Dashashwamedh Ghat in Varanasi where she took five dips in river Ganga and also performed Ganga Arti.

Veteran writer V Vijendra Prasad, who has also written films like Baahubali, Baahubali 2 and Bajrangi Bhaijaan is behind the script of ‘Manikarnika: The Queen Of Jhansi’. Prasoon Joshi is another big name who has written the storyline of the movie.