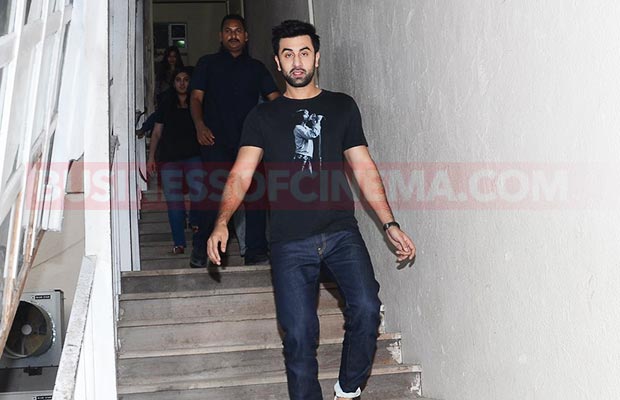 [tps_footer]Bollywood actors Ranbir Kapoor and Deepika Padukone are leaving no stone unturned for the promotions of their upcoming film ‘Tamasha’. The duo is seen flashing their sizzling chemistry during the promotions and that is grabbing all the eyeballs.

Of course both the highly talented actors have forgotten their past, but the new bonding and unique friendship between them is very adorable. Talking about their recent promotional event, the two were seen at their adorable best. Wearing Anushka Khanna+ Alexander Wang maxi dress and jacket, the gorgeous lady was seen hugging Ranbir Kapoor while posing for the shutterbugs. Adorable isn’t it?

As we all know Ranbir Kapoor and Deepika Padukone are known as golden pair of the industry and excitement among the fans to see them together is once again high! The expectations for the film are quite high, as the film sees two ex-lovers back on the silver screen again after their last film ‘Yeh Jawaani Hai Deewani’.

Talking about the film ‘Tamasha’, the film sees sizzling chemistry between the two. The film decodes relationships and much more and the major part of the film has been shot in exotic locations of Corsica.

Directed by Imtiaz Ali, the film is slated to release on November 27 and it’s been wonderful journey for Ranbir Kapoor and Deepika Padukone while shooting for the film. The duo is now waiting for the release of the film as they are hoping that the audiences will like it as much as they do.[/tps_footer]