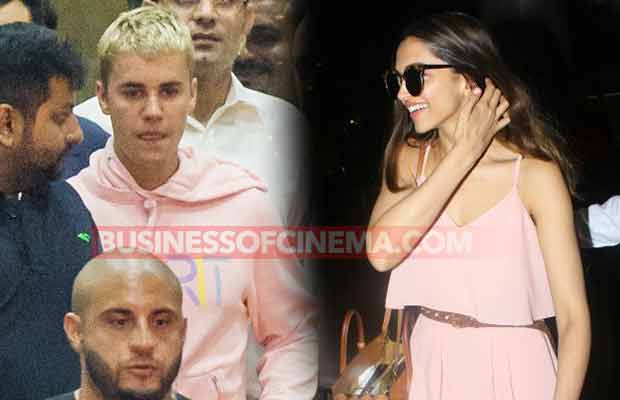 The Grammy winner artist, Justin Bieber has arrived in the country for the much-talked Purpose Tour 2017. The pop star was spotted arriving at the airport last night amid tight security. He came in a chartered flight along with his crew sporting a pink sweatshirt and black shorts.

As soon as he walked out of the airport to make his way to the hotel venue, fans could not hold their excitement and were seen chanting, “Justin, Justin”. He was rushed out of the airport and was quickly whisked off to St Regis Hotel in south Mumbai amidst Z-plus security.

On the other hand, Bollywood actress Deepika Padukone was also spotted at Mumbai airport last night at around 1 AM. The actress was also seen sporting baby pink colour maxi dress from All About You collection. Deepika, who has geared up for the shooting of her upcoming film, Padmavati, was all smiles for the shutterbugs as she arrived at the airport. Don’t you think nobody better than Deepika Padukone can carry best airport looks?

Coming back to Justin Bieber’s concert, after rocking the stage in Dubai on May 6, the singer is set to perform in Navi Mumbai on Wednesday.

Justin Bieber is likely to fly in a private helicopter to the D.Y. Patil Stadium for his concert, which will first see Indian DJs on stage followed by Norwegian DJ Alan Walker.

The concert venue, reported to be fully sold out with over 45,000 seats, will open at 3 p.m. and Justin Bieber is expected to give his performance at 8 p.m., according to the tour organisers, White Fox India.

Navi Mumbai Police has deployed massive security, including surveillance by drones for the event. Around 500 police personnel and 25 officers would be deployed for security and emergency disaster management at the venue.