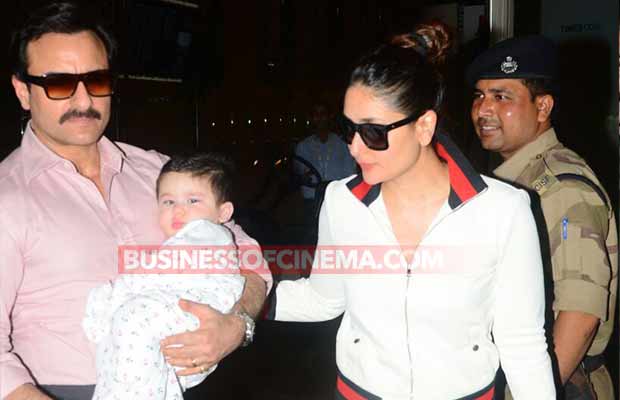 Bollywood couple Saif Ali Khan and Kareena Kapoor Khan take off for their first holiday trip with baby Taimur Ali Khan. The couple was spotted at the airport with son Taimur as they were heading for their international holiday. One can see in the photos, Saif Ali Khan holding his seven months old son Taimur while Kareena walks along. The trio also poses for a happy family picture. Moreover, Taimur Ali Khan’s reaction to the paparazzi is adorable and we just can’t move our eye off from him.

As earlier we reported, the family will be staying in a suite at the Royal Gstaad Palace for two weeks.  The Gstaad Palace is a popular destination for the jet-setting crowd and is the favourite place of Saif and Kareena who visit every year, for the last five years.

To people who don’t know, every year since Kareena Kapoor and Saif Ali Khan have been together, their annual year-end holidays have been to the snow-capped sanctuary of Gstaad in Switzerland.

On the other hand, Saif Ali Khan will begin with the promotions of his upcoming film Kaalakaandi. The trailer of the film was unveiled recently and has received a positive response from the audience.