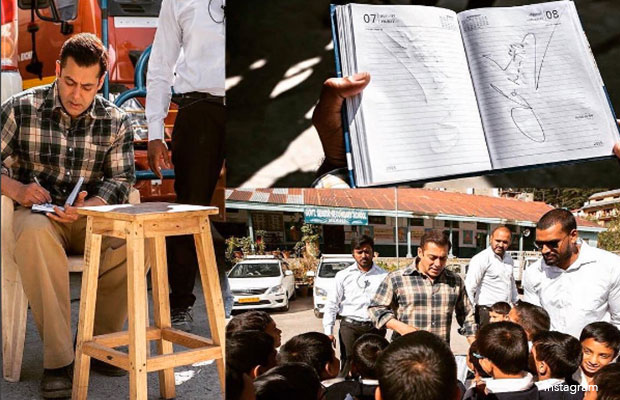 Before gearing up to host the controversial reality show Bigg Boss 10 from October 16, Bollywood actor Salman Khan is trying to wrap up Manali shooting schedule of his upcoming film Tubelight. The actor is having a good time in Manali along with hectic shooting schedules. The localities in Manali are happier and are giving a warm welcome to the actor. We have got our hands on few pictures of Salman Khan spending time at a school.

We all know Salman’s love for little kids is endless and not leaving a chance, Salman Khan spent an evening with them at a school in Manali. One can see in the photos, Salman is having a good time interacting with the kids. The actor even gave autographs to the little kids, making their day more pleasant.

After his blockbuster film Sultan, fans are eagerly waiting for Salman Khan’s next, Tubelight. All the eyes are on Salman’s next film, being directed by Kabir Khan.

Talking about the film, as per reports, the film is based on 1962 war and will be set in Sino – India war zone. It is said Sohail Khan will play a mute character in the film. The film also stars Chinese star Zhu Zhu!