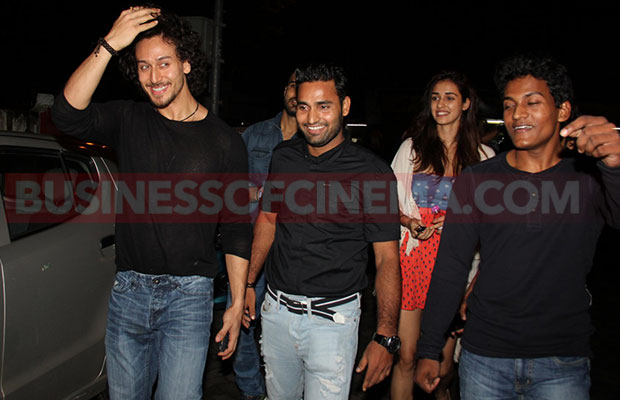 Firstly, there is no truth to the reports stating that actors Tiger Shroff and Disha Patani have split. Yes, Disha and Tiger are enjoying each other’s company. While sorts of reports are doing rounds that Tiger and Disha have broken up, we bring adorable recent photos of them. Disha and Tiger, who are allegedly in a relationship were spotted together last night. It seems Disha, who was busy with the promotions of her recently released film, M.S Dhoni-The Untold Story has finally got some time to hang out with her friends.

Going by their adorable and happy photos, its looks like the two are going stronger and have absolutely not broken up. One can see in the photos, the two look comfortable posing for the shutterbugs and for the first time, didn’t shy away from being caught together. Isn’t that enough to know about their strong relationship?

Tiger and Disha have been very much secret about their alleged relationship and have also denied link-up rumours but it is said that the two are seeing each other for a while. Disha Patani had also accompanied Tiger and his family on a holiday!

Rumours were buzz that Tiger and Disha who were going strong together have now called it quits because of Tiger’s mother Ayesha Shroff. Apparently, Ayesha doesn’t like Tiger spending too much time with Disha. But with the latest photos, all these rumours have been put to rest.

So all you Tiger and Disha fans, relax because they are together and happy!