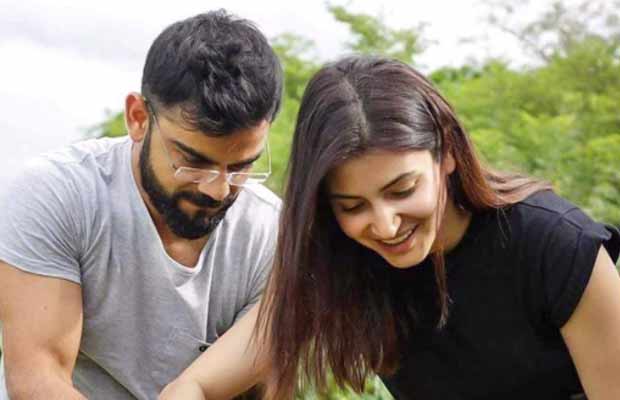 The couple is enjoying the call of nature all the way in Sri Lanka. Virat Kohli, Indian cricket team captain, and Bollywood actress Anushka Sharma are dating from as far as we can remember. We never see the duo, Anushka Sharma, and Virat Kohli together. But since they’re on a vacation, the duo have been spotted at parties and shopping and now enjoying nature in Sri Lanka.

Fans of the couple rarely get to see the cricketer and actress roaming the streets or at parties. So this picture is a big blessing for them. The fan clubs have gotten a hand on the pictures and shared them virally all over social media.

Anushka Sharma and Virat Kohli were seen planting a sapling. The image is cute and the gesture is sweet. The actress is seen in dressed in a casual attire of black tee and jeans. Virat looks on and later helps Anushka out in a gray tee, jeans and a pair of sunglasses.

The cute picture of the couple is giving us some seriously positive vibes. We love that the couple is finally spending some much deserved time together. Anushka Sharma was rumored to have ditched the IIFA awards this year to be with Virat Kohli. How sweet!

Virat Kohli will be there in Sri Lanka for as long as September as the Indian cricket team will be playing a Test series, 5 One Day Internationals and a Twenty20 series against Sri Lanka. Anushka Sharma, on the other hand, has taken a break from work and is enjoying some time with her boyfriend in Sri Lanka.

On the bright side, Virat Kohli and Anushka Sharma are literally couple goals!