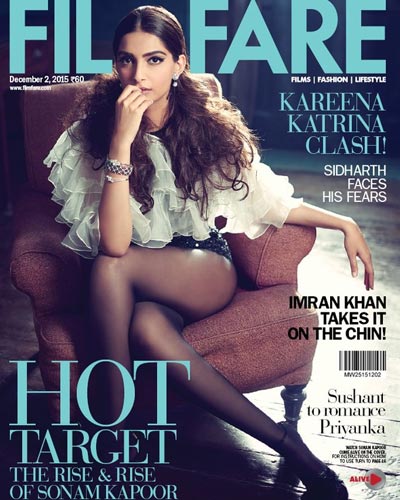 Bollywood’s fashionista Sonam Kapoor, who was seen in royal traditional looks in her recent released film Prem Ratan Dhan Payo opposite Salman Khan, turns to be extremely hot now. After impressing everyone with her desi look, Sonam Kapoor has featured on the December issue of Filmfare magazine and is looking extremely hot yet bold.

Dressed in white crop top, black glittery shorts and stockings, Sonam Kapoor is seen sitting crossed legs on the chair. Keeping minimal make up, two sides pony tail with centre participation and finishing out the entire bold look with delicate earrings and bracelet, Sonam Kapoor looks smoking hot and we are sure nobody can take his or her eyes off from the picture. The cover photo caption reads, “Hot Target The Rise & Rise Of Sonam Kapoor”

Sharing behind the scenes and her cover picture of magazine, Sonam Kapoor tweeted, “Love this cover!! @jiteshpillaai and @anewradha have done a scintillating interview.”

Sonam Kapoor is surely soaring the temperature, what’s your take on her this look?

On the work front, Sonam Kapoor is currently celebrating success of her recently released film Prem Ratan Dhan Payo with Salman Khan. Directed by Sooraj Barjatya, the film has finished its first four day weekend run at the box office and has very well crossed the 100 crore mark.[/tps_footer]