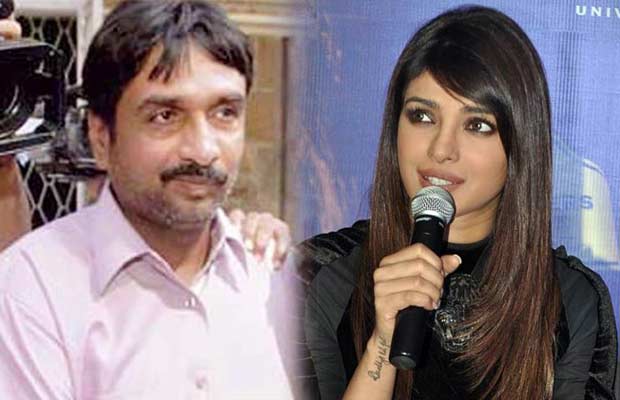 [tps_footer]Bollywood actress Priyanka Chopra had recently arrived in India to collect her Padma Shri from President Pranab Mukherjee in New Delhi. The actress was honored yesterday with the most prestigious award for her contribution to Indian cinema. Not only that, she has been conferred with India’s fourth highest civilian honour.

During the interaction with media, Priyanka Chopra also dismissed all the claims made on her by former manager Prakash Jaju. Recently, Prakash Jaju had created a controversy alleging that the actress tried to commit suicide thrice during her struggling days. The actress has finally broken her silence and has slammed media for giving credits to Prakash Jaju’s tweets.

“This is utter… First of all, it’s so sad that Indian media has given credibility to the man, who was in jail because of harassing me, without checking the history who the person is. So, I have nothing to say because there is no credibility to this person, who media is giving credibility to,” Priyanka Chopra told reporters at the event.

Jaju had issued the controversy days after Pratyusha Banerjee committed suicide. Talking about the same, the actress said, “Why don’t we talk about those women, who commit suicide because they were harassed by the mother-in-laws or being beaten in their homes? Or they kill themselves because they are unhappy in their homes? It’s so easy to turn around and say about the showbiz world.”

Priyanka also expressed her disappointment on people who are talking about Pratyusha’s death without knowing the actual truth. “Nobody knows the truth. Nobody ever tried to find out what the poor 24-year-old girl was going through… And as usual, people are dissecting her life. People are unnecessarily talking about her, not giving her and family the respect they deserve right now,” the actress told reporters.

“Young people are also committing suicide in colleges and hostels. I believe why they have to kill themselves for somebody else. I would kill that person first before ending my life for the person,” she added.

Here are some of the tweets, which were made by Prakash Jaju few days ago. 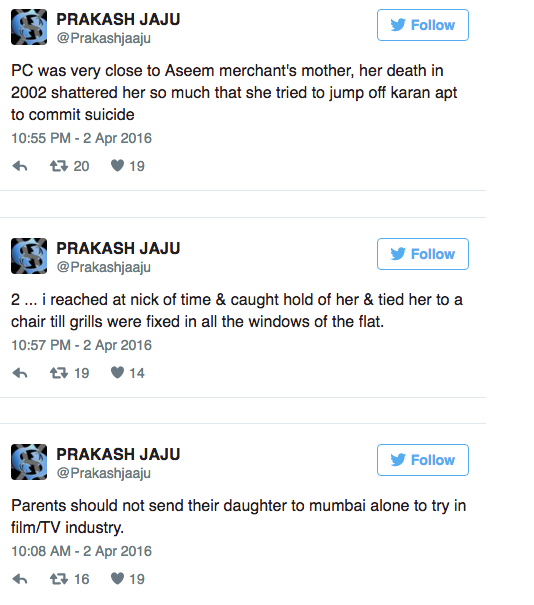