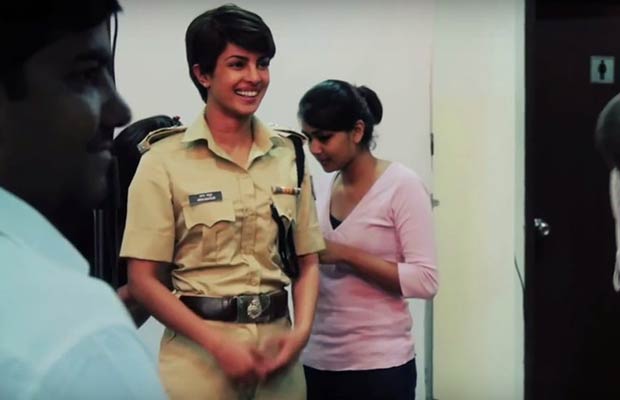 [tps_footer]Priyanka Chopra has always kept her name higher on the list of versatile Actors who can carry any look and can portray any character in any movie under the guidance of any director. She is that talented and adjusts with different teams at different points.

For now, she is busy in west with her Television series Quantico and she had already shot for Prakash Jha‘s sequel, “Jai Gangaajal” to his first movie “Gangaajal” starring Ajay Devgan. Priyanka plays a fierce Cop Role who can sacrifice her life for the love of nation and can even beat the hell out of goons and all the baddies including the ones sitting on higher posts in politics.

We have seen Priyanka as a autistic patient in “Barfi“, a career oriented woman in “Dostana“, a selfish-hungry for success woman in “Aitraaz“, hard hitting boxer in “Mary Com” and many more. She kept changing her looks, make up tricks, hairstyles, costumes as well according to the character’s need and requirements. Now in “Jai Gangaajal“, she will mostly be seen in wearing formals, dress code of a cop, a cap and she will mostly don a “jooda” in the flick as Peecee will be mostly “on duty” in the movie taking over the baddies. So, it’s expected from her to follow the discipline of a police officer.

Priyanka Chopra is managing her career so well in India and in the West. She is setting a big example for everyone, to have careers in India and West, simultaneously, in acting and singing. Wayyyy to gooo Rockstar !!