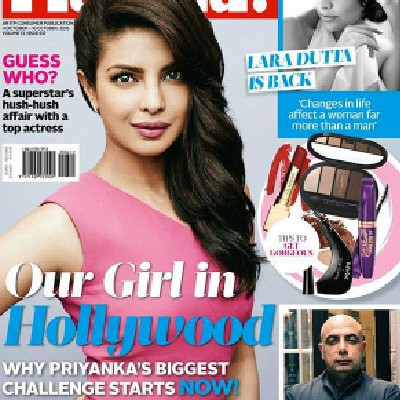 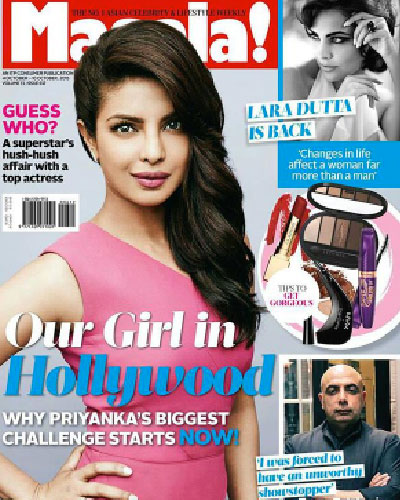 Priyanka Chopra is creating history with her much talked about and highly appreciated work in Hollywood. She has already proved herself in Bollywood thanks to great film choices that she had made in the past. She has done it all from posing for posters, flaunting her style on the red carpet to appearing on T.V chat shows. We have loved every effort that she made to make herself seen, known and popular in the foreign land.

PeeCee is back with a bang and we will soon see her as the girl in pink on the cover of Masala Magazine. She is currently looking her best thanks to vigorous gym training and great diet maintenance. She is sporting a one sided parted hair look in a pink fitted dress. We totally adore her look which is a mix of glamour and elegance. On the magazine cover it shows Priyanka Chopra as ‘Our Girl In Hollywood Why Priyanka’s Biggest Challenge Starts Now’

For her fans in India we are less than a day away from watching the premiere episode of PeeCee’s much hyped ABC productions venture ‘Quantico’. The show revolves around group of FBI In the show; Priyanka plays the role of a half-Indian, half-Caucasian FBI trainee named Alex Parrish agent in training at ‘Quantico’ Base. Priyanka Chopra is suspected of masterminding the biggest attack on New York City since 9/11 in the first episode itself. For those who have been a fan of ‘How To Get Away With Murder’ and ‘Scandal’, ‘Quantico’ is just the right show.

PeeCee’s fan in India will delighted to see her on silver screen soon with her ambitious next historical project of ‘Bajirao Mastani’. The movie is currently of the hottest selling number in media; it is the pet project of Sanjay Leela Bhansali and is huge in terms of set, cast and settings. We will see a dashing Ranveer Singh, Deepika Padukone and Priyanka Chopra play lead roles.

Priyanka we are proud of you and hope to see more from you soon for Indian small screen viewers.