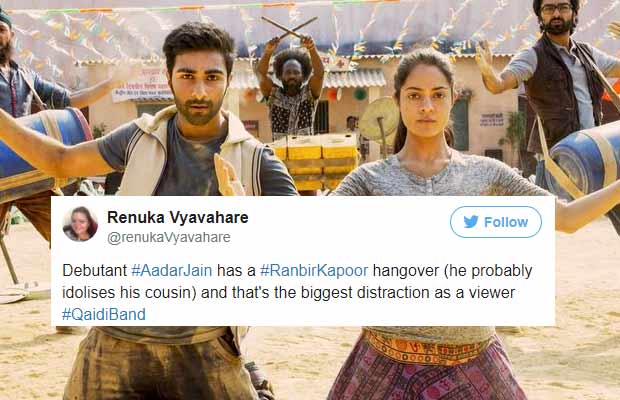 YRF has launched two newbies, Aadar Jain and Anya Singh in the Bollywood industry with the film Qaidi Band!

The Bollywood industry has got two new members Aadar Jain and Anya Singh with the film Qaidi Band. It is their debut film and the expectations are quite high.

The actors Aadar and Anya had managed to make an impact in the intense trailer of Yash Raj Films’ Qaidi Band. As under trials seeking freedom with their music and the unusual band within the four walls of a prison, their story is about seeking and struggling to find freedom.

The song, Hulchul, from the film, captures the pain that their struggle for freedom ensues beautifully. The cast of the film had launched another song of the film ‘I Am India’ at The Gateway Of India, Mumbai.

The response from the audience on the social media Twitter has been a mixed one. Some have liked the film, others have not. The upcoming days with the Ganpati holidays will tell the fate of the film.

Yash Raj Films’ Qaidi Band features Aadar Jain and Anya Singh in the lead. Directed by Habib Faisal, the film is a riveting tale of Undertrials who come together to form a band in jail and their music becomes their only hope for freedom.

Meanwhile, check out some of the tweets from the people after watching the film:

#QaidiBand most of the show has been Cancelled bcoz of no interest for the film.

This was Pvr ahmedabad today in the morning me and my companion no one else watched it .. #QaidiBand pic.twitter.com/IUTxaogLQi

If movie making is an art then Habib Faisal is an artist. Kudos to #Qaidiband team!