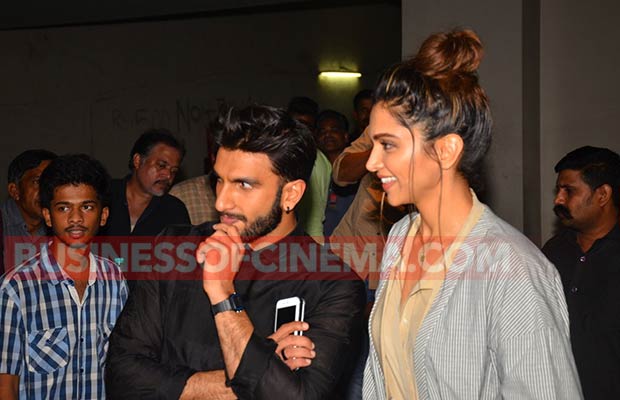 Yesterday, Ranveer Singh and Vaani Kapoor unveiled the trailer of their upcoming film, Befikre at the Eiffel Tower in Paris. Many fans were present at  this grandeur trailer launch event. Ranveer called one of his fans on the stage to greet him. Well, the actor had no idea that this greeting would turn into an embarrassing moment for him.

First, the fan mouthed a popular dialogue from the actor’s 2015 blockbuster, Bajirao Mastani. He was so impressed by the fan that Ranveer said, “You win a Filmfare award for this one.”

Then the fan asked him a weird question that left the actor appalled. The fan said that his girlfriend who stays away from Paris always said Ranbir Kapoor (slip of tongue instead of Ranveer Singh) was her boyfriend until he left her for Deepika Padukone! Ranveer had a shocking expression on his fan. Ranveer surprisingly asked the fan, “What?”

Ranveer felt embarrassed after listening to this question and he told his fan that he really needs some sound sleep and sent him off the stage. Well, it would be interesting to see what Deepika has to say about this!

Also, before the trailer launch, the Gunday actor reveals that he has dated a lot of Indian and French girls in the past. He said, “Women of India and France are sensitive, stronger and superior to men. I am a lover of women. I am truly fascinated and infatuated by the fairer sex. I have had French and Indian girlfriends. I have beautiful memories attached with all of them. So I can’t differentiate.”