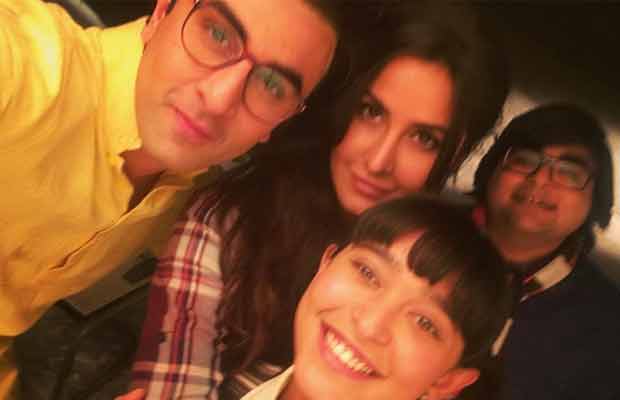 Seemingly, the ex-lovers, Ranbir Kapoor and Katrina Kaif, are extremely professional. First they shot cordially with each other for Anurag Basu’s Jagga Jasoos and now, they are even getting clicked together!

Though, Ranbir Kapoor And Katrina Kaif’s break-up did cause some delay in the already delayed movie which got postponed numerous times between 2014 and 2017 and currently, the film’s release date is July 14 this year, but now it’s all good.

There were reports that the two are not planning to promote the film together. Katrina Kaif shed some light on this piece of news. “At least a hundred stories about Jagga Jasoos must have come out, but probably 99% of them aren’t true. As of now, I don’t know the marketing plans of the producers or distributors of the film.Whenever they share that plan with me, and since it’s my own film, I will be happy to do whatever they feel is good for it,” says Katrina to Hindustan Times, in her interview.

Meanwhile, just recently, both the exes Ranbir Kapoor and Katrina Kaif clicked a selfie on the sets of a television show. Although the film’s promotions haven’t begun yet, Ranbir and Katrina appearing together publicly and clicking a selfie have left us all excited.

As we all know, after Facebook Katrina made a debut on Instagram yesterday. Amongst other stars like Akshay Kumar and Salman Khan, her Jagga Jasoos co-star welcomed Katrina on Instagram by sharing a selfie from the sets of the film and captioned it as, “To mark the debut of the goddess on Instagram.. here’s a blurry memory (thanks to Ranbir) post wrap! @katrinakaif Welcome aboard! @jaggajasoosdisney.”

To mark the debut of the goddess on Instagram.. here’s a blurry memory (thanks to Ranbir) post wrap! @katrinakaif Welcome aboard! @jaggajasoosdisney

Directed by Anurag Basu, Jagga Jasoos will hit the theatres on July 14.