Friday has turned out to be a big day in the entertainment world. Bollywood superstar Salman Khan’s third track “Tinka Tink Dil Mera’ from the movie Tubelight was released today. On the other hand, Ranbir Kapoor-Katrina Kaif’s “Galti Se Mistake” from Jagga Jasoos was also released at the same time. Yes, the song launch of the two upcoming films clashed on the social media.

However, Salman Khan starrer Tubelight song was released directly on YouTube while Ranbir-Katrina launched their peppy song in a grandeur way. The former couple came together for the song launch event, which was quite a big thing for media as well as fans. It was the much-awaited moment to see them together again.

It has been a few years now and going by their recent appearances at the launch event, it clearly looks like that they have practically ‘moved on’. For now, it seems like both of them are staying away from relationships and are focusing on their movie. Ranbir and Katrina not only shared the same stage but also teased each other like good friends.

Anyway, the most surprising thing about the two song launches was Salman Khan’s Tubelight song did not trend on Twitter while Ranbir-Kat’s Galti Se Mistake was trending on no.1 position. You don’t believe? Check out the Twitter trending screenshot right below: 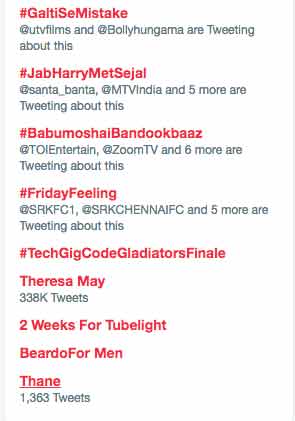 For today, Ranbir Kapoor has clearly stolen the thunder from Salman Khan, thanks to his presence with ex-girlfriend Katrina Kaif (Otherwise nobody can). Moreover, it is quite shocking that despite Salman sharing the song on his Twitter, it did not trend.

Meanwhile, watch both the song here: