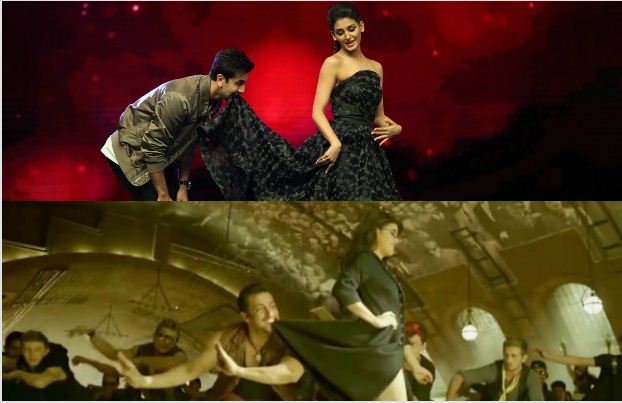 Who doesn’t remember the signature step of Salman Khan’s Jumme Ki Raat from the film Kick where he is seen hauling Jacqueline Fernandez’s dress? This song from this blockbuster film made everyone groove on the dance floor and all the dance lovers imitate this popular dance step even today.

Even the heartthrob of the tinseltown, Ranbir Kapoor couldn’t stop himself from doing this iconic dance step. Yesterday, Ranbir Kapoor was seen in the Grand Finale of a popular dance reality show Dance Plus 2 for the promotion of his upcoming film Ae Dil Hai Mushkil. At the Grand Finale of the show, Ranbir danced with the choreographer-turned-judge Shakti Mohan on the tunes of Govinda’s Hero No.1 song and emulated the steps of Jumme Ki Raat. The dance step looked very similar to that of Salman–Jacqueline’s song and we couldn’t stop comparing the same.

Apart from that, the Barfi actor who was at his candid best had a lot of fun on the show and mesmerized everyone. He also grooved on his famous songs like Ghagra and Badtameez Dil and also entertained everyone with his funny antics.

On the work front, Ranbir Kapoor will be seen next in Karan Johar’s Ae Dil Hai Mushkil, which will is all set to lock horns with Ajay Devgn’s Shivaay at the box-office this Diwali on October 28, 2016. ADHM also stars Aishwarya Rai Bachchan, Anushka Sharma and Fawad Khan in the lead roles.