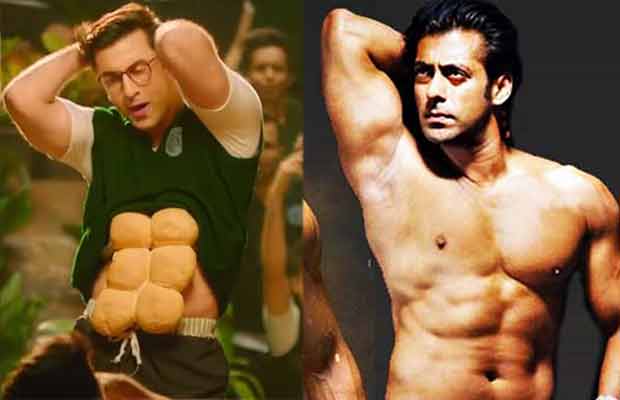 Ranbir Kapoor has taken a dig at Superstar Salman Khan in the latest song of Jagga Jasoos ‘ Galti Se Mistake’ in a friendly way.

Ranbir Kapoor has posed like Salman in the song, replicating his signature pose where Salman showcases his 6 pack abs.

But instead of showing his abs Ranbir makes it funnier by using 6 pieces of bread in place of his abs and then replicates Salmans pose.

Ranbir playfully has taken a dig at Salman Khan with this pose.

Salman Khan is known for his muscular body and is the first actor for having well-built physique in Bollywood.

He has been the pioneer for Bodybuilding in Bollywood.

Salman Khan has been a fitness inspiration to millions of people in the country and many people in Bollywood too.

Ranbir Kapoor’s Galti se mistake, the second song from Jagga Jasoos was released some time back and has been loved by one and all.

All the content pieces which have been out yet has been received well by the audiences and has created immense buzz for the movie.