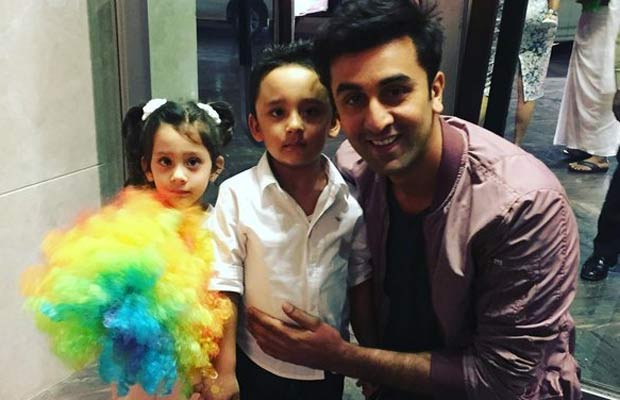 And, now we have spotted Ranbir Kapoor getting cozy with Sanjay Dutt‘s children Shahran and Iqra. After a long time we have seen such a big smile on Ranbir Kapoor‘s face or else he would usually be miffed with the media and he would try his best to escape media and shutterbugs. But, this time for a change Ranbir looked happy and pretty interactive. Is it the love and cuteness of Sanjay Dutt‘s kids that made Ranbir happy or that his flop career is still getting a lot of good response is making him smile this way?

Only time can tell us that but we hope Ranbir Kapoor gives an unforgettable performance in Sanjay Dutt‘s biopic and bring his career back on the track of success and appreciation. It’s high time Ranbir should focus on his acting career than chasing co-actresses to be his girlfriends, and even his image in the industry has been damaged with his two ‘alleged’ break-ups and the spirit to move on so quickly as if nothing happened at all. Great acting skills offscreen but he needs to show that onscreen too which has been missing in his recently released movies.[/tps_footer]