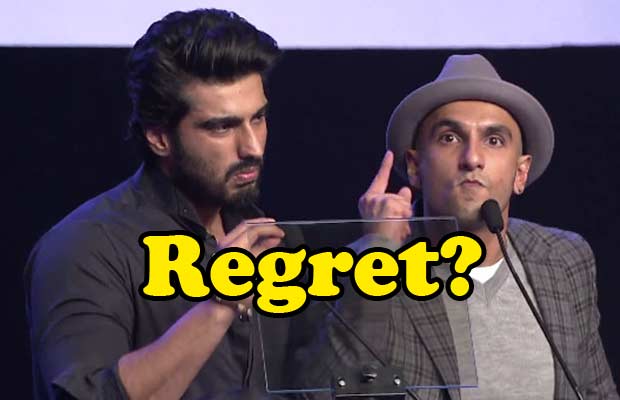 [tps_footer]Bollywood actor Ranveer Singh, who received accolades for his performance in Sanjay Leela Bhansali’s ‘Bajirao Mastani’, attended the NDTV Indian of the Year awards last night in Delhi. The actor won the award for Entertainer of the year and entertained the audience with his moves.

At the award ceremony, Ranveer interacted with media. During the interaction, one of the reporters asked whether he had any regrets on participating in All India Bakchod’s roast. The actor said that he had no regrets on being part of the show. He said that their intentions were good and they did that for charity. He added that the team introduced a new form of comedy in the ambit of entertainment. Some people didn’t like it and it is alright.

AIB Knockout event was held in December 2013 and was inspired by Comedy Central Roast US, where a celebrity is mocked in front of thousands of people. The roast featured Karan Johar as the roast master, a panel of people as the roasters and Arjun Kapoor–Ranveer Singh were the celebs who got roasted. AIB Knockout was held in Worli and the video was released a month later on AIB’s Youtube channel. After the video release, the knockout ran into a huge controversy over the featured content.

Arjun Kapoor and Ranveer were roasted in front of 4000 people. The video also garnered over 8 million views but after the case was filed against everyone AIB team decided to pull down the video.[/tps_footer]