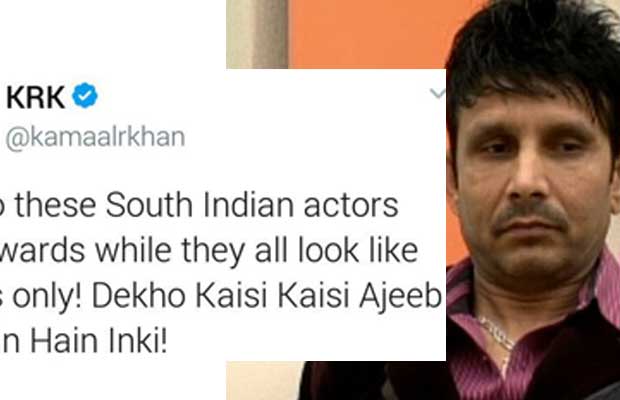 KRK has once again made an offensive tweet but later deletes it in fear.

The controversy king Kamaal Rashid Khan, who is popularly known as KRK has once again made an offensive tweet. Well, KRK is very much habituated of being trolled because of his offensive tweets and he continues his trend. This time, Kamaal R Khan has made a racist comment on South Indian Stars.

The controversial king shared a group picture of South Indian actors from the ongoing IIFA Utsavam awards in Hyderabad. Several South celebrities including megastar Chiranjeevi, Dhanush and others were present at a launch event of IIFA Utsavam, an awards show to honour the best performances in South cinema.

Amid that, Kamaal took to twitter to throw his unwanted opinion. He tweeted with a picture, “Why do these South Indian actors need awards while they all look like awards only! Dekho Kaisi Kaisi Ajeeb Shaklain Hain Inki!” 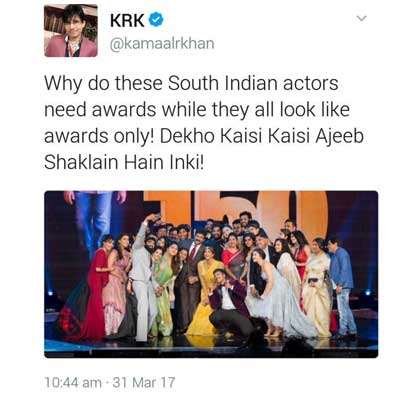 After receiving criticism from the twitter user, KRK immediately deleted the tweet. He surely knew that this tweet can get him into a big mess and so, he chose to delete it. The twitter users stormed at KRK on twitter taking him left, right and centre.

The famous outspoken and man with a large number of Twitter followers Kamaal Rashid Khan had to surely face the ire of this act.

Earlier too, KRK had expressed his opinion on South Indian actors. He had tweeted this last year.