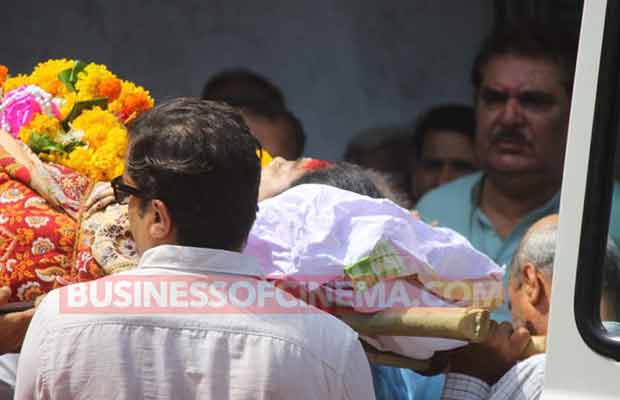 Mohnish Bhel is deeply shattered with his onscreen mother Reema Lagoo’s demise and he expressed his loss on an emotional note.

Bollywood veteran actress Reema Lagoo is not among us anymore. The versatile actress left for heavenly abode yesterday morning after suffering from a cardiac arrest. Reema Lagoo,59 passed away yesterday morning at 3:30 am of a cardiac arrest. Ms. Lagoo had been taken to the Kokilaben Hospital at night after she complained of severe chest pain. The whole industry is currently in a state of shock.

Thinking of Bollywood “Maa”, Reema Lagoo’s name is what we think off. She is most remembered for her role as mother in Rajshri Productions films like ‘Maine Pyar Kiya’, ‘Hum Aapke Hain Koun…! ‘and ‘Hum Saath Saath Hain’. And in these films apart from Salman Khan and Alok Nath, her co-star was Mohnish Behl. In fact in ‘Hum Saath Saath Hain’, they played the roles of mother and son.

When India.com contacted Mohnish Behl to talk about the sad demise of Ms.Lagoo, he said,

“I have done a lot of cinema with Reema ji , on account of that we have spent a lot of time on sets. What came through about her was that she was a warm and gracious human being. She was a senior actor to us, but however we never felt the divide, we always felt very warm and welcome with her. There was no kind of generation gap with her, we could fool around since she would understand where we are coming from. We were so connected with her that on set, the first question we asked was is Reema ji on set. She was like a friend, who was just a little older.”

“She was a very welcoming and warm human being. In fact I have a small house in Versova where i used to stay if i had late night shifts and Reema Ji used to stay in opposite and we used to talk from the windows. She was a wonderful wonderful woman. It is a terrible loss.”

He also added what about Reema Laago inspired him. He revealed,

“It was her warmth that inspired me, she was content in every way.”

Like us, even Mohnish feels that she has left us too soon and so suddenly. He said,

“I came to know she was working until day before yesterday. I believe she was just 59, it’s too young an age to go”.

Mohnish Bhel also regrets not being able to meet her,

”I haven’t met her in a good many years, I have not been working and whatever little work I have done was not with her. I always had a thought, rather wish in mind that Sooraj (Barjatya) should make a film with the same cast & crew he has worked with earlier. If that happens now, the void, the vacuum created by Reema ji’s death will always remain,” said the actor in grief.

From Salman Khan, Sanjay Dutt, Viraf Patel among others, who had played the role of Reema Lagoo’s onscreen son in many films, expressed their grief on a very emotional note and how stunned they are with the sudden death of the great actress.