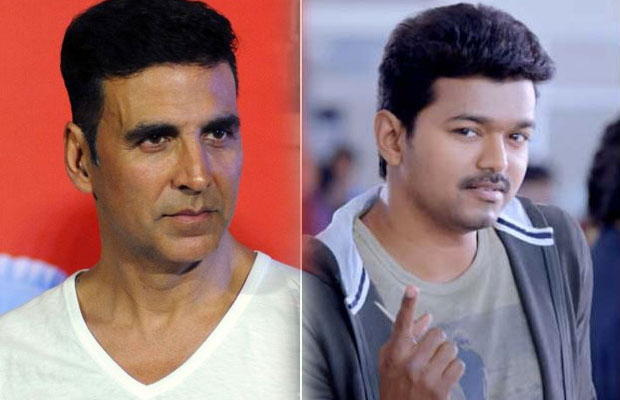 [tps_footer]Action star Akshay Kumar is lately doing highly credible films. The mind blowing actor who is a pro in comedy has diverted his genre to serious films. Akshay is much in the news for his upcoming film ‘Rustom’. However, the actor will also be seen in the Hindi remake of ‘Kaththi’.

The Hindi remake of ‘Kaththi’ is titled ‘Ikka’. The film will be an official remake of the Tamil blockbuster ‘Kaththi’. The movie will be shot majorly in Mumbai. The female lead of the film is yet not decided and also the villain is yet to be confirmed.

Except for Akshay no other star is yet officially roped in for ‘Ikka’. Another interesting update about the film has now come about. Akshay Kumar’s role in the much awaited remake is now revealed. The amazing star will play a double role in the film.

Akshay will start shooting for the film after he is done with the movies ‘Jolly LLB 2′ and ‘2.0′. ‘Ikka’ is likely to go on floors in 2017. The film will be directed by AR Murugadoss’ assistant Jagan Shakti.

Though ‘Ikka’ is an official remake of ‘Kaththi’, the Hindi remake will have slight changes. The Hindi version will depict the water shortage crisis whereas ‘Kaththi’ was based on the issue of farmer suicides.

Currently, Akshay Kumar has most number of projects at hand. The super busy  actor apart from ‘Ikka’ will be seen in ‘Jolly LLB 2′, ‘2.0′, ‘Rustom’ and ‘Namastey England’. The final script narration for ‘Ikka’ is yet to be done; the stated narration will take place after Murugadoss is done with ‘Akira’.[/tps_footer]