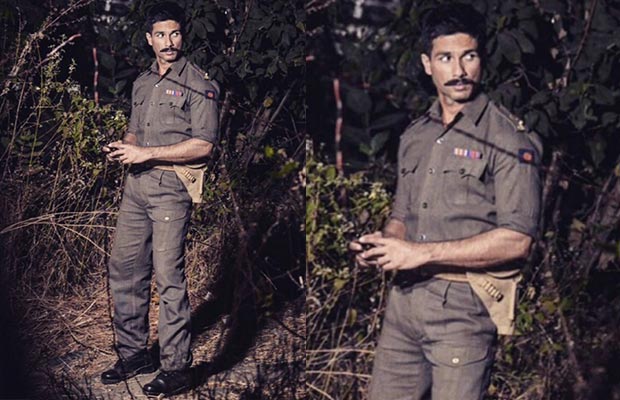 [tps_footer]Shahid Kapoor is eagerly looking forward for his film ‘Rangoon’. A lot has been said about the historic film since its inception. The movie was much in limelight since the star cast of the film was announced. ‘Rangoon’ stars actors Shahid Kapoor, Kangana Ranaut and Saif Ali Khan in lead roles. The unique star cast surely was the talk of the town.

Directed by Vishal Bhardwaj, the looks and the characters of the film have been kept under wraps. Not much is known about the roles of the actors too. Well, breaking the secret box Shahid Kapoor’s look from the film ‘Rangoon’ is finally out.  After donning all the boy next door roles Shahid Kapoor broke his image with the film ‘Haider’, yet again following the suite Shahid will be seen in an intense avatar in the film ‘Rangoon’.

According to a leaked picture, Shahid Kapoor was spotted in an army officer like uniform. The Vishal Bhardwaj film ‘Rangoon’, is set in the backdrop of World War II. Not much about the story line of the movie is yet known but it is speculated to be a Casablanca like love story.

Shahid Kapoor in the picture is seen in a crisp unique uniform, the actor has also sported a mustache for the character. Must say, Sasha is nailing his officer look to the core. With an intense look the handsome hunk is all engrossed into the character it seems.

Reports suggest that Shahid Kapoor has trained himself thoroughly for the film ‘Rangoon’. Filmmaker Vishal Bhardwaj, who is known for making intense film adaptions, is already making the audience eager with the concept of the film. The film ‘Rangoon’ is expected to be a rich movie in terms of content and execution.

The film has just started off with its shooting schedule and Shahid Kapoor is already making us curious about the same.[/tps_footer]