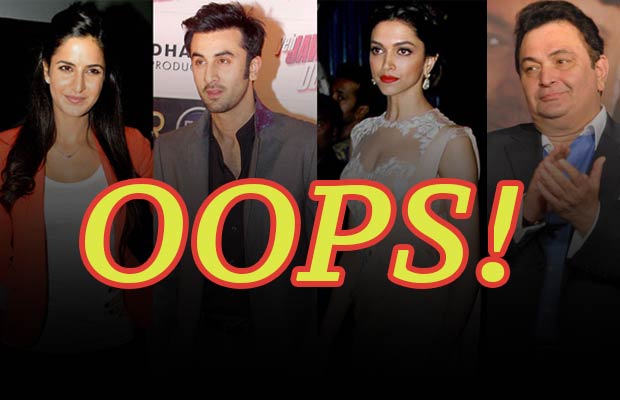 [tps_footer]Bollywood actor Rishi Kapoor is known for his witty sense of humour, charismatic personality, passion for cinema and also for his diva-ish tantrums. He is the man of B-Town who defines attitude and never hesitates on blaming many journalists for asking questions, he calls bad photographers to those who asked him to pose again. Rishi Kapoor even blesses his followers and fans on Twitter with hilarious yet insulting comments and he is never sorry about anything.

But, in a recent interview, he got carried away in a conversation and Rishi Kapoor revealed about Ranbir Kapoor‘s past two relationships with his co-actresses, one we know is Deepika Padukone and the other one also we know it’s Katrina Kaif but both, Ranbir and Katrina are such brilliant actors ‘offscreen’ that they have straight away denied all the rumours of their hookup, living in, unsolved issues leading to separation, and ugly breakup.It’s like nothing was there between them at all and they are facing no issues even while shooting for Jagga Jasoos, hmm.. so their good co-ordination is the reason for so many delays and cancellations of scheduled Jagga Jasoos shoots at so many times.

It’s like nothing was there between them at all and they are facing no issues even while shooting for Jagga Jasoos, hmm.. so their ‘good co-ordination’ is the real reason for so many delays and cancellations of scheduled shoots for Jagga Jasoos so many times? Rishi Kapoor didn’t take any names and we are guessing here the whole world knows about Ranbir Kapoor breaking up with Deepika Padukone and it was said he was cheating on Deepika with Katrina Kaif while shooting for Ajab Prem Ki Gazab Kahani. And, their own Prem Kahani has ended in a very weird way where none of them feel good to even accept the fact they had a relationship, once upon a time.

Anyways, after revealing about Ranbir Kapoor‘s past relationships Rishi added that he is not against his son dating and having a relationship with his co-actresses and he never interferes in Ranbir‘s personal life and suggests whom he should be with. It’s Ranbir‘s life and he should decide who he is happy with, this decision is going to be of Ranbir Kapoor and not of his parents. But, we all know the coldness Rishi Kapoor showed towards Katrina Kaif.

Dear Rishi Kapoor action speaks louder than words and media is not dumb to not understand everything that you don’t say directly. Just a reality check![/tps_footer]