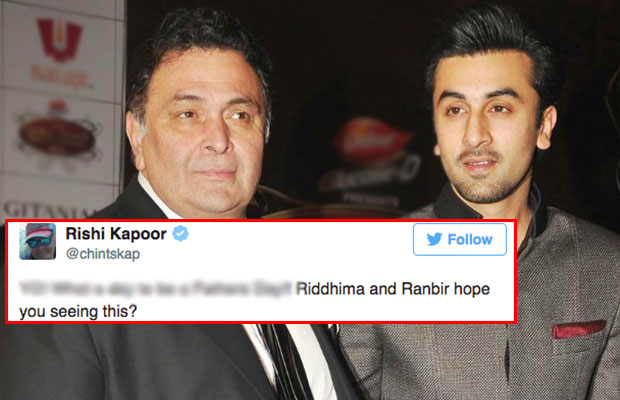 Rishi Kapoor who made headlines for his hilarious tweet, is back with a tweet but this time it is not funny. Rishi Kapoor was in New Zealand with wife Neetu Singh for a getaway. Where he came across something and thought of sharing it with his kids.

YO! What a day to be a Fathers Day!! Riddhima and Ranbir hope you seeing this? pic.twitter.com/MDd8ORPbhQ

The picture says Father’s Day on September 4th. Apparently, Father Day is celebrated on September 4th in New Zealand, whereas we celebrate it on the third Sunday of June. In this post, Rishi Kapoor has tagged son Ranbir Kapoor and Daughter Riddhima Kapoor asking them if they are seeing this post and captioned it as Yo! What A day to be a Father’ Day.

But as we know Ranbir Kapoor is far away from Twitter though we recently got to know that he has a secret account on Instagram, but in the candid interview with Rajeev Masand he clearly mentioned that he is not Twitter. I guess father Rishi Kapoor is not aware of it and so he has tagged Ranbir Kapoor to view the post. Hope this post reaches to Ranbir Kapoor as well as Riddhima Kapoor.

Do you wonder why Rishi Kapoor is so happy to celebrate Father’s Day on September 4th? We will tell you.

It is the veteran actor’s birth date. Rishi Kapoor who will turn 64 on September 4th wishes to celebrate Father’s day on the same date. And so he wants his kids to look at this post and celebrate his coming Birthday as well as Father’s day.