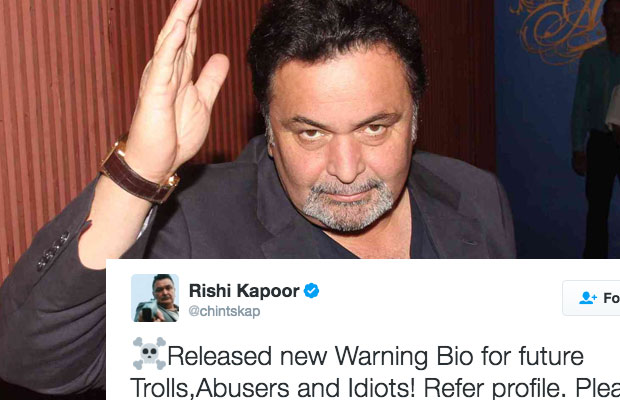 Recently Rishi Kapoor was making headlines for abusing women on Twitter via direct message feature on the micro blogging website. Everyone thought that a celebrity and a public figure of his stature should weigh his words before he decides to lash out using such crass language on a public platform. After which he blocked them.

The 64-year-old actor clearing his stand said that he would hit back at the abusers in their language.

Rishi Kapoor found an innovative way to keep the menace out of his profile. No, he didn’t delete his Twitter account. He loves being there, why would he?

He changed his bio! Now, not many people look at bios every day. So he put up a tweet making people aware of his bio change. It said, “Released new Warning Bio for future Trolls,Abusers and Idiots! Refer profile. Please ignore sensible friends. Let’s live in a fun World”. 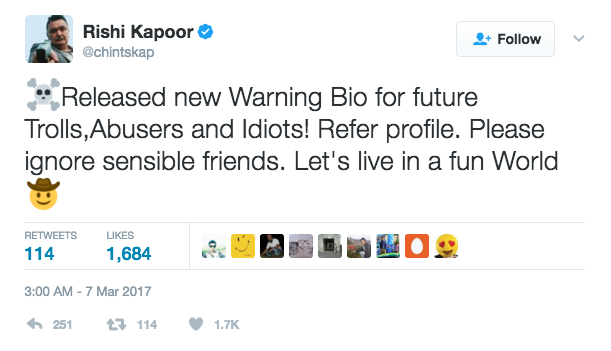 Chintu Kapoor has made it clear as to what the people who follow or reply to him mustn’t do. “Don’t you dare try Trollers and Abusers! You will be abused and BLOCKED-so your loss if you following. Enough of patience! Signed-Terrorist of the family”, reads Kapoor’s bio on twitter, while making his opinion extremely clear.