The hit maker of ‘Bobby’ has interesting tweets and he’s always up-to-date, he has something or the else to tweet and say. From festival’s to occasions, Rishi Kapoor has it all. So does the media later, to speak and make an controversy about the same.

“Demolish. Adios Regal Theatre, Delhi. A place where all the Kapoor’s theatre and cinema work was seen. Had ‘Bobby’ premiered there too! Thank you!”  This is what Rishi Kapoor tweeted in the morning after knowing that Regal Theater in Delhi is going to shut down. Aren’t these words full of emotions and affection? 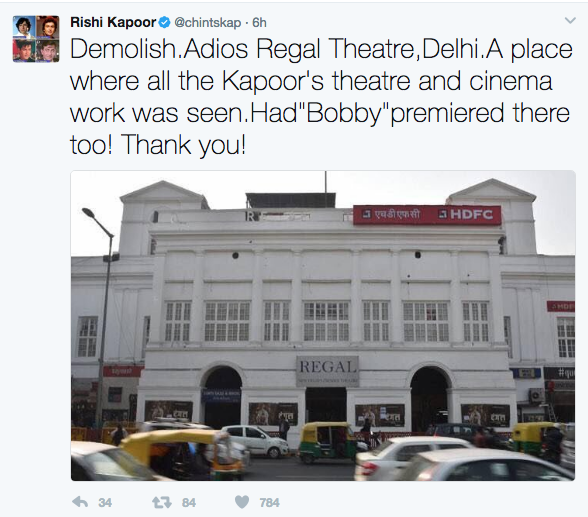 Rishi Kapoor and his entire family’s career had begun in Regal Theater. This theater has always been close to his heart because why not, his first debut film was screened in Regal Theater. On this last day, the owners of Regal Theater have decided to screen Rishi’s father, ‘Raj Kapoor’s’ classics “Mera Naam Joker” & “Sangam.”

Regal Theater back then used to have Prithviraj, perform his plays and Raj Kapoor’s films used to get premiered in Regal. Reportedly, Regal used to have healthy relations with Prithviraj Kapoor and son Raj Kapoor. Regal is located at Connaught Circus, Connaught Place in New Delhi.

Regal was designed by an architect named, “Walter Sykes George” and it was opened in the year 1932. After 85 years of success, today on March 30, 2017, Regal Theater shuts down. We hope you have a great day, Rishi Sir!