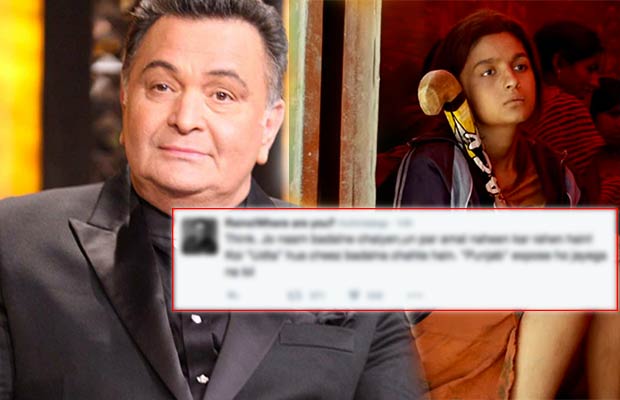 [tps_footer]Udta Punjab starring Alia Bhatt, Shahid Kapoor, Diljit Doshanj and Kareena Kapoor Khan is stated to release on 17th June 2016. The film has garnered a lot of attention, due to the brutal cuts given to the film by the Censor Board. Bollywood industry has now come  in the support of Udta Punjab and stars are now tweeting about the same too. One such star who has tweeted about the controversy is Rishi Kapoor. Rishi Kapoor is known for his humor and sarcasm on twitter, he often never shies away from expressing his thoughts on certain issues. Let it be on changing name of roads or let it be on Kamal R Khan, Rishi Kapoor‘s tweets always manage to grab attention. Now, Rishi Kapoor recently tweeted, “Think. Jo naam badalne chaiyen,un par amal naheen kar rahen hain! Koi “Udta” hua cheez badalna chahte hain. “Punjab” expose ho jayega na lol.”

Not only Rishi Kapoor, even Karan Johar and Dia Mirza have commented on this issue and have tweeted supporting for the same. Karan tweeted, “#UdtaPunjab speaks of the reality of our times….censoring reality amounts to delusion…..the fraternity has to stand by what’s right!!” While Dia tweeted, “Those who believe films can empower, educate and inspire change NEVER give in or give up. #CBFC #UdtaPunjab.”

We really love Rishi Kapoor‘s reaction and we hope that at least now Censor Board thinks of revising the cuts.[/tps_footer]