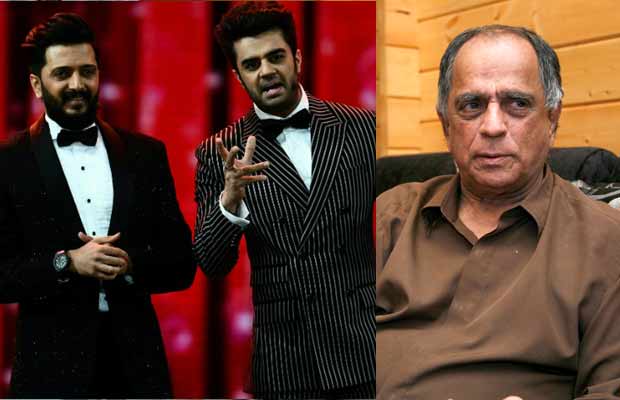 The controversies around this year’s IIFA Awards don’t seem to end. Co-hosts Karan Johar, Saif Ali Khan and awardee Varun Dhawan chorused “Nepotism Rocks”, which created an uproar on social media. Soon Varun, Saif Ali Khan, and Karan Johar apologized Kangana Ranaut for mocking her at IIFA awards over nepotism remark. Now, Riteish Deshmukh has apologized for a skit performed at the IIFA Awards, mocking censor board chief Pahlaj Nihalani. After which, Pahlaj Nihalani sent the organizers of the IIFA Awards a legal notice for making defamatory remarks about him on stage.

Riteish, one of the two actors who performed the skit, told NDTV.com, “The segment was about our film industry being a big family and who plays what role in it. Yes, there was a comment on Pahlajji. The entire act was done in good humour but if it has upset him or anyone else, I would like to tender unconditional apology.”

Pahlaj Nihalani sent a five-page legal defamation notice to the IIFA and Wizcraft International [the organizers of the event], asking for a public apology over defamatory remarks passed against him by Riteish Deshmukh and Manish Paul.

In the legal notice sent to IIFA, Pahlaj Nihalani’s lawyer Suren Uppal stated that his client’s picture was misused at the awards ceremony and that Nihalani was referred to as a ‘watchman’. The notice also reads that this was created with an intention to “create an adverse atmosphere in the public against Nihalani” and “to increase the TRP of the show”. Pahlaj Nihalani has demanded a public apology from the actors.