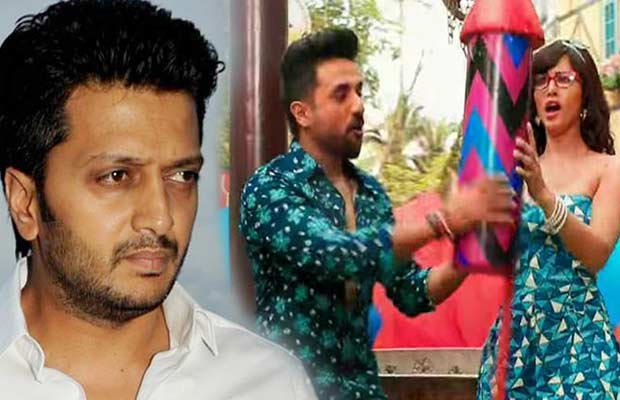 [tps_footer]Ritesh Deshmukh who is always calm and poised amidst the shutterbugs has lashed out his strong views against ‘Mastizaade’ makers. The actor who is always happy go lucky and never falls into any hassle is very furious with the makers of the s** comedy. The Sunny Leone starrer film ‘Mastizaade’ is gaining headlines for its highly vulgar trailer.

Well, now there is some problem which might put the makers of ‘Mastizaade’ into a spot. The adult comedy film also stars actors Tusshar Kapoor and Vir Das in lead roles apart from Sunny. The trailer however, also features actor Riteish Deshmukh in a glimpse. The comic actor Riteish is so not pleased with his glimpse in the trailer of the sex comedy.

Riteish Deshmukh, who is active on the micro blogging site Twitter, took to the site and blurted out his views for the same saying, “I am part of 2 scenes and a song in MastiZaade -nothing more. I am requesting the makers again- Please honour our agreement. #Disappointed.” 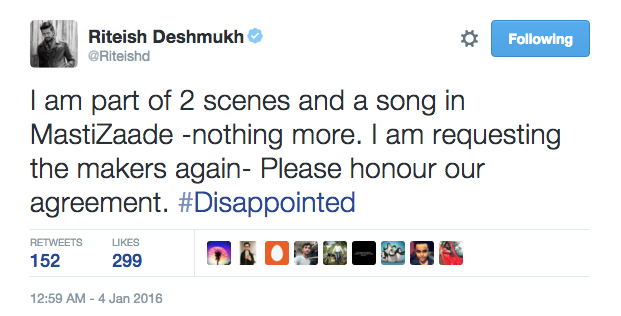 The actor further tweeted saying, ‘Disappointed with MastiZaade :Its shocking to see them blatantly use me in their promotions-Absolute breach of my contract-agreement &trust.” 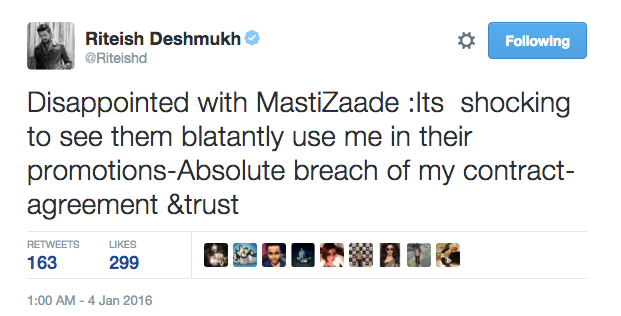 Seems like, Riteish Deshmukh is extremely hurt with this stance and is not in a mood to take things lying down. Sunny Leone’s film ‘Mastizaade’ has received loads of negative comments for ill-mannered trailer. Actor Tusshar Kapoor who will also be seen in another comedy ‘Kyaa Kool Hain Hum 3′ has also witnessed the brunt of being a part of this movie.

Well, seems like apart from the Censor troubles, movie ‘Mastizaade’ is yet to witness many more hassles starting with Riteish Deshmukh. Now what turn this stance takes only time will tell.
[/tps_footer]