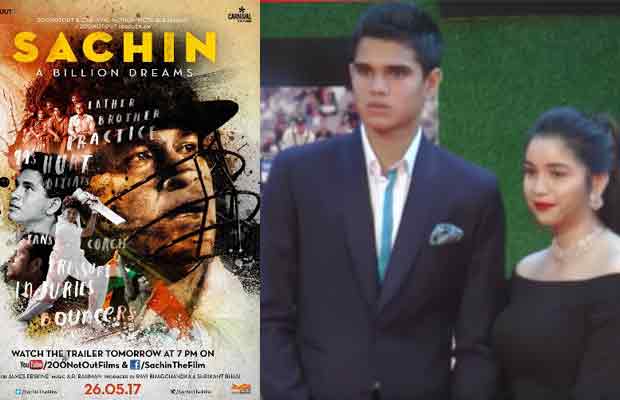 The premiere launch of Sachin Tendulkar’s Biopic Sachin : A Billion Dreams took place yesterday in Mumbai.The premiere was attended by the Indian Cricket Team and many Bollywood celebrities.

Sachin Tendulkar’s daughter Sara Tendulkar shared her favorite moment from the film. Sara looked stunning in a black outfit which she complimented well with Jewellery.

“Growing up I never really understood the magnitude of the personality that is Sachin Tendulkar. I think for me he was just always my father and it was just simple but after watching the movie it’s just made me truly understand what everyone else thinks of him and how they respect him.”

Talking about her favourite moment of the film, Sara added,

While Sara told the media about her feelings about the biopic and how she realized what Sachin Tendulkar means to the world, brother Arjun refused to talk or pose for the media. We wonder what made him say nothing about his father’s film. He didn’t seem to be in a good mood.

Arjun and Sara were last spotted at the Justin Bieber Concert in Mumbai. Sara isa huge fan of Justin Bieber and we have all seen her fan girl moment with the singer. While Arjun attended the concert despite having a leg injury.

Apart from Sachin Tendulkar’s family, his friends, cricketers and various Bollywood celebrities attended the grand premiere of Sachin :  A Billion Dreams. The movie will hit the theatres tomorrow i.e., May 26, 2017.

Have you booked your tickets yet?