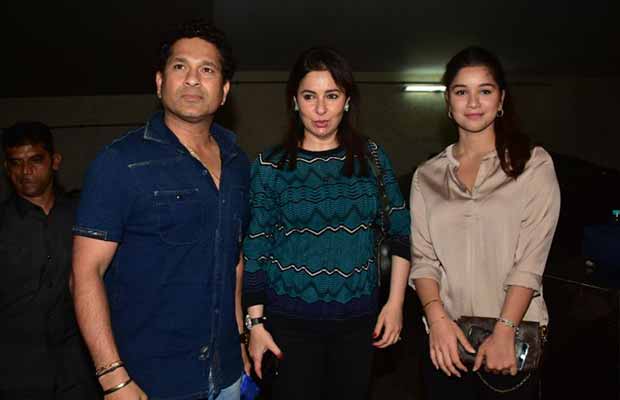 Farhan Akhtar had hosted a special screening of his upcoming film Lucknow Central for his friends from the Industry and closed ones.

The screening was attended by all the big wigs of Bollywood.It was surprising to witness that even Master Blaster Sachin Tendulkar had attended the screening with his family.

Sachin along with his wife Anjali and daughter Sara was present at the screening.

There were heaps of praises coming for Farhan Akhtar’s performance from Sachin and his family after the screening ended.

He and his family loved Farhan Akhtar’s portrayal of a small town guy who has aspirations of being a singer.

The legendary cricketer and his family were pleasantly surprised by seeing Farhan in a non-
urban avatar and have loved the film.

Sachin felt that Farhan has played his part extremely well in the film despite the fact that it’s his first outing with a non-urban role.

The film has been loved by everyone who had attended the screening and the performances of Gippy Grewal, Ronit Roy, Deepak Dobriyal, Diana Penty, Rajesh Sharma, Inaamulhaq, Uday Tikekar, Sukh Kunwa has been appreciated. The film has a strong ensemble cast and each of the actors have delivered a powerful performance.

Interestingly Farhan Akhtar is playing the role of a UP guy for the very first time and we can say that he has nailed it completely.

Lucknow Central is being presented by Nikkhil Advani, who has earlier won hearts with films like Airlift and D-day the film has got on board debutant director Ranjit Tiwari.

Farhan Akhtar’s ‘Lucknow Central’ is one of the highly anticipated films of the year.