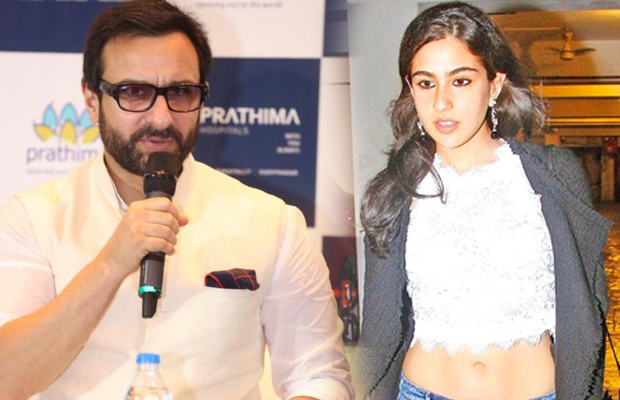 The Chote Nawab Saif Ali Khan‘s daughter Sara Ali Khan had to be in the industry someday. After all, she is a star kid. Being born in a star family means you’re lucky enough to get the ticket easily. Sara Ali is set to make her debut and reports suggest that she will be launched opposite Shah Rukh Khan‘s son Aryan Khan by none other than, Karan Johar himself, who has earlier launched Varun Dhawan and Alia Bhatt in Student of the year.

While Sara Ali has been in the news for being linked to projects like Student of the year 2, now we definitely know Karan Johar and Sara are connected in terms of work.

Well! What excites here is that what her beloved father and a star himself, Saif Ali Khan has to say about her debut. When he was asked about her debut he said that he is really excited about her entry in Bollywood and is like a guide, friend and a philosopher to her and both share a connective bond. He always advises about life, art and also about films. He in fact said that he tells Sara Ali about how her mother and his first wife, Amrita Singh has taught him enough when he first came to Mumbai.

Saif Ali Khan said that he focuses and teaches her too to focus on ten commandments. When asked about what these were, he said that he taught Sara Ali to first listen rather than talk and stay calm because silence is everything in Bollywood. Then, he said he suggested her to decide what kind of an actor does she want to become and work hard for it because it’s a creative and wonderful job.

Saif Ali Khan added that he blesses Sara for what she has learnt and fortunately she got into this because this is what she had dreamt to do since she was just two years old but he suggested her to finish her education first.

Sara Ali, who is very excited to be in the industry wants to enjoy her profession and acting. Sara doesn’t just want to enjoy the glamour of this profession and is blessed by her father Saif Ali Khan.

Well! We can’t wait to watch her on the screen. After all coming from a Bollywood family if is easy then there are also many responsibilities of keeping that name that they carry.