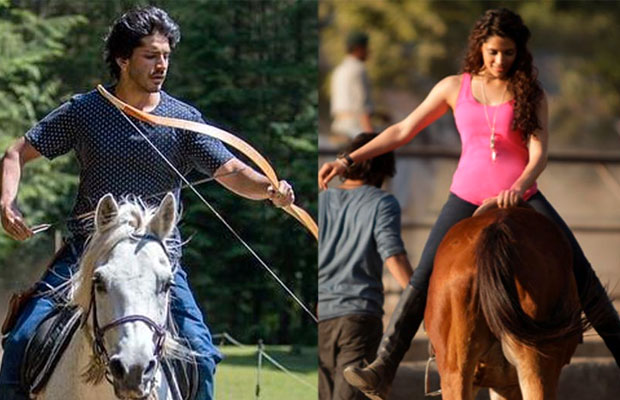 Mirzya is based on the legend of Mirza–Sahiban, a popular Punjabi folklore.

The debutants had to go through an intense and extensive training for over a year before they could start shooting for the film.

Apart from physical transformation, Harshvardhan and Saiyami attended workshops and had to learn horse riding for the film.

The duo shifted base to Delhi where they would rigorously prep, right from starting their day at 6.30 am with horse riding, spending the afternoon at the acting workshop and again horse riding in the evening. Harsh also suffered injuries while learning horse riding. It took them 6 months only to start galloping properly and pick up the skill.

After completing his training period in Delhi, Harsh went to Seattle in the US and lived in a ranch on the outskirts of the city. He stayed there for over two months with 30 horses and learnt all the techniques associated with a horse rider.

After getting a knack of horse riding, Harsh went on to learning archery. The actor was required to perform mounted archery in Mirzya and so the actor went all out to master the skill.

The makers of the film were keen to have Harsh perform all the action on his own and he went on to learn everything from the scratch.

Harsh and Saiyami additionally learnt bike riding for their characters too!

The debutants have definitely given all their blood and sweat for Mirzya. The duo has ignited good buzz around their pairing and the film which has been in talks. The music of Mirzya has gone off really well with audiences which brings uniqueness to the album.