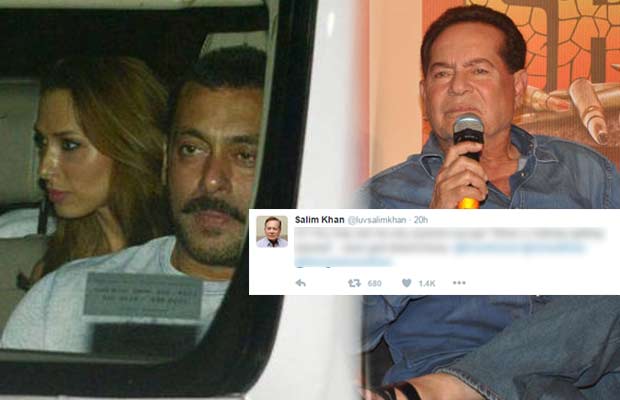 Bollywood actor Salman Khan is in the limelight for his rumoured relationship with Iulia Vantur. Recently, the two even met Dalai Lama in Ladakh and took blessings like a couple. That has left fans and the media speculating an impending wedding of the actor. Well, we wonder why not make it official when everything is so obvious?

Each and everyone wants to know when Salman Khan will get married and the answer to this question is only with the actor. Yesterday, Salman Khan’s father Salim Khan took to twitter to announce his new radio show. He even tweeted saying that people can ask him any questions but except one- “When is Salman Khan marrying?”

He tweeted, “2/2 You may ask me any question except “When is Salman getting married” – even god doesnt know. @KiranKotrial @SohailKhan @BeingSalmanKhan.”

Well, it seems Salim Khan is very much aware of the questions that will be asked to him and he already made everyone aware of not asking him about Salman’s marriage. This can be another disappointment for the fans as they are very much curious to know about their favourite star’s personal life

Recently, during an event, Sania Mirza asked Bhai that not many women are complaining about him staying a bachelor. Salman quipped, ” I know a few who are complaining. Aapko nahi pata kitna pressure hai. (You don’t know the amount of pressure on me.)”

What are your thoughts on the same? Share in the comments section below!