Amy Jackson feels over the moon, shot for Salman Khan’s Being Human Campaign.

Amy Jackson was last seen in the movie Freaky Ali with Nawazuddin Siddiqui. She is seemed to be back with her good days in Bollywood. The actress hasn’t been able to build up her career in Bollywood with a very few releases that she had.

But now the tables seem to have turned for the lady as she has joined Salman Khan. For nothing else but as an ambassador for the clothing line of his brand, Being Human. The actress shared a picture from the campaign tweeting, “Over the moon to be a part of the new #BeingHuman Campaign with @beingsalmankhan II Styled by @ashley_rebello II Makeup @jacobsadrean & hair @aasifahmedofficial.”

Amy Jackson is also to be seen in an upcoming big release of the year ‘2.0’. She will star opposite South Indian superstar Rajnikanth and the Khiladi of Bollywood Akshay Kumar. While the actress has already wrapped up shooting for the movie, it will hit the theatres in Diwali this year.

Amy Jackson, who was also rumoured to be cast with Salman Khan for the sequel of ‘Kick,’ has recently launched her own app called ‘Amy Jackson Official App’, which will give her fans, a chance to connect to her via the in-app social feed & also access her through the social media accounts.

After wrapping up work on Kabir Khan’s ‘Tubelight’, Salman Khan has now reached Austria. He is in Austria to shoot for Ali Abbas Zafar’s action-flick ‘Tiger Zinda Hai’. The film will see Salman reprise his role opposite Katria Kaif. 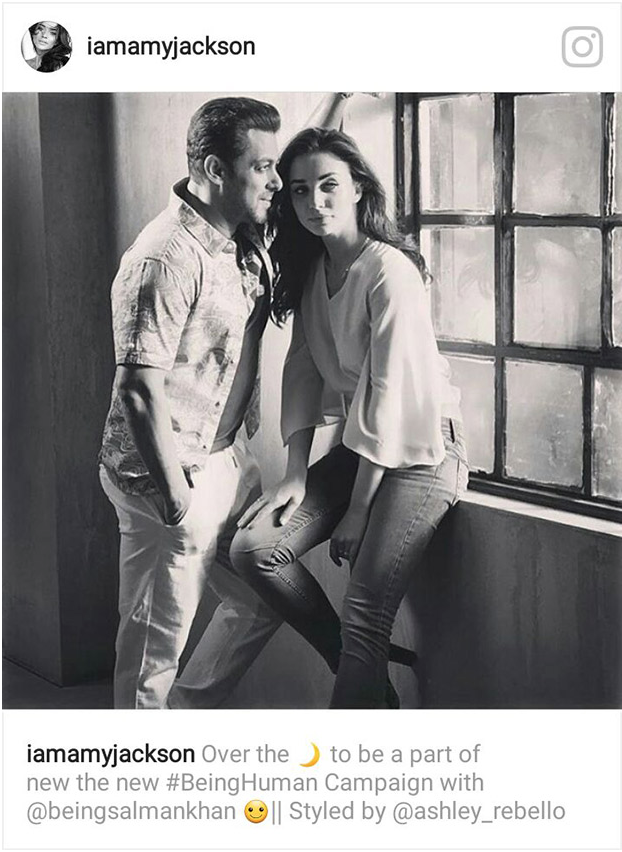