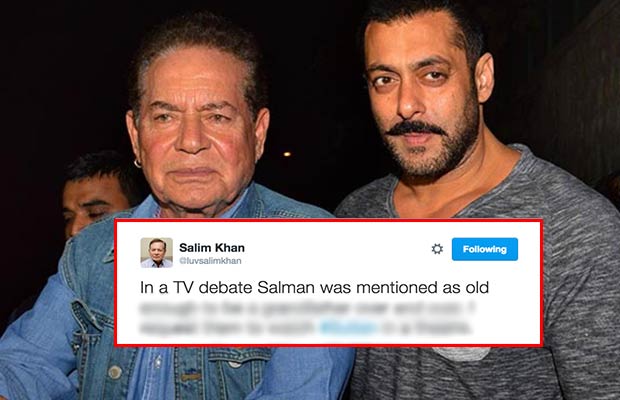 Soon Salim Khan took to his twitter handle and said that people who think Salman Khan is old enough to become a grandfather should watch his film Sultan. He also slammed media saying that people have a strong temptation to hurt people.

Here’s what he tweeted in the series of his tweets, “In a TV debate Salman was mentioned as old enough to be a grandfather over and over. I request them to watch #Sultan in a theatre. And wonder how could a man old enough to be a grandfather do this. People have strong temptation to hurt people. but to resist this temptation will make them human which is the greatest of all religions.” 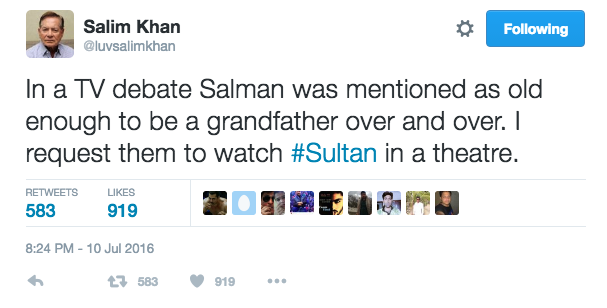 The very recent incident when Salim Khan came in support of his son was when Salman Khan said that after hectic training session he felt like a ‘raped woman’. Soon his statement triggered controversy on social media and even some women activists demanded an apology from the actor.

While people were expecting an apology from the actor, Salman Khan‘s father Salim Khan took to twitter to apologise on behalf of his son. He tweeted, “Undoubtedly what Salman said is wrong, the simili, example and the context. The intention was not wrong. Nevertheless, I apologise on behalf of his family his fans & his friends. Forgiveness is to pardon the unpardonable or it is no virtue at all. To err is human to forgive divine. Today on Intl yoga day lets not run our shops on this mistake.”

Well, Salman does not need to worry when he has his father’s hand is on his back!
[/tps_footer]