Bollywood actor Salman Khan has a big heart and is no news to us. Not only because he runs his NGO, Being Human, but also he knows to bring a smile on someone’s face. From spending time with little needy kids to adopting families and his non-stoppable charities, he has done it all. The actor is known for giving helping hand to the needy.

The actor has adopted many villages in Maharashtra and outside for his charitable work. The Bajrangi Bhaijaan star has also helped the underprivileged children across India to get a better education. Well, this time Salman Khan has done another heart touching work. The actor has donated Rs 1 Lakh for the treatment of a TV cameraman suffering from brain hemorrhage. Salman Khan has once again extended his help for the person fighting with a disease at Lilavati Hospital, Mumbai. 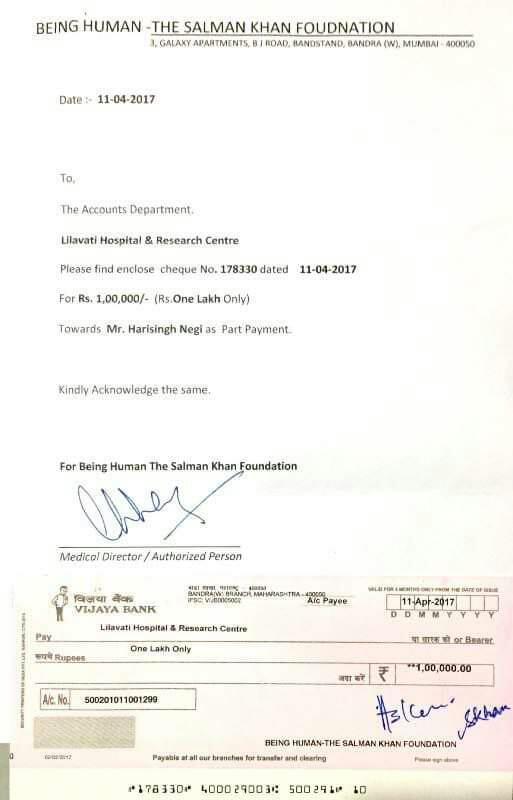 On the work front, Salman Khan is shooting for his upcoming film Tiger Zinda Hai. The actor packed up the first schedule of the film in Austria and second schedule in Mumbai yesterday. TZH is a sequel to Kabir Khan’s Ek Tha Tiger, which is now being directed by Ali Abbas Zafar. The film brings Salman and Katrina Kaif together after 4 years. The film is scheduled to release this year in December.

Meanwhile, the trailer of Salman’s Tubelight will be released next month. The teaser of the film will release by the end of this month. Directed by Kabir Khan, Tubelight is set to release this year on Eid.