Being a major part of actor is being connected to your audiences, especially your fans. Thanks to social media, the actors now do not have to rely on print or telly interviews to communicate to your fans and followers. Superstars like Amitabh Bachchan, Shah Rukh Khan and Salman Khan have over 20 million followers on the micro-blogging website Twitter.

A few days ago, Salman Khan promised a huge surprise for his fans on his upcoming birthday on December 27. Obviously, there were a lot of speculations around what it could it be.

Now, the actor took to Twitter to reveal the big plan. Check it out here.

He shared a picture and the image read: “On December 27, it is my app’s birthday. Only for you.” 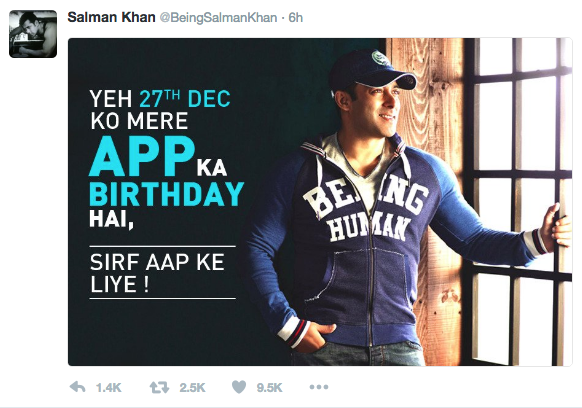 Yes!!! You read that right!! Salman is coming up with his personal app, which will be available from December 27 onwards. While Salman didn’t share more information regarding the app, it is sure to be like a birthday indulgence for his fans.

Reportedly, through the app, the Sultan star will be interacting with his fans and will be posting details about his whereabouts as well as about his filmy projects.

As we all know, he has already planned a big birthday bash for his 51st birthday at his farmhouse in Panvel and invited the who’s who of Bollywood.

Professionally, Salman Khan is currently busy shooting for Kabir Khan’s ‘Tubelight’ which is set to release on Eid, next year. He will also be seen in the sequel of Ek Tha Tiger called ‘Tiger Zinda Hai’ opposite his ex-girlfriend, Katrina Kaif.