Salman Khan’s alleged girlfriend Iulia Vantur is in Romania since a month and more and it is speculated that all’s not well between the adorable couple. But recently, Iulia scotched the rumours by sharing a Karwa Chauth picture that showcased her vision on the festival, leaving everyone surprised. Well, Salman Khan and rumoured girlfriend Iulia Vantur have never admitted to being in a relationship, but Iulia’s Instagram photos tell a different story.

Now we have come across another surprising picture that proves that Salman and Iulia are together. Actor-politician Bina Kak, who is like a family to Salman Khan, shared an adorable picture of her grandson with Iulia Vantur with a caption, “#kabir with his# aunty n#sweetheart@vanturiulia”

Well, has Kak Bina confirmed Salman Khan and Iulia’s relationship with this picture? The caption of the picture tells everything and well, our guess is as good as yours.

Not just that, Iulia Vantur too replied on the picture saying, “Thanks for posting this pic.. love this moment” 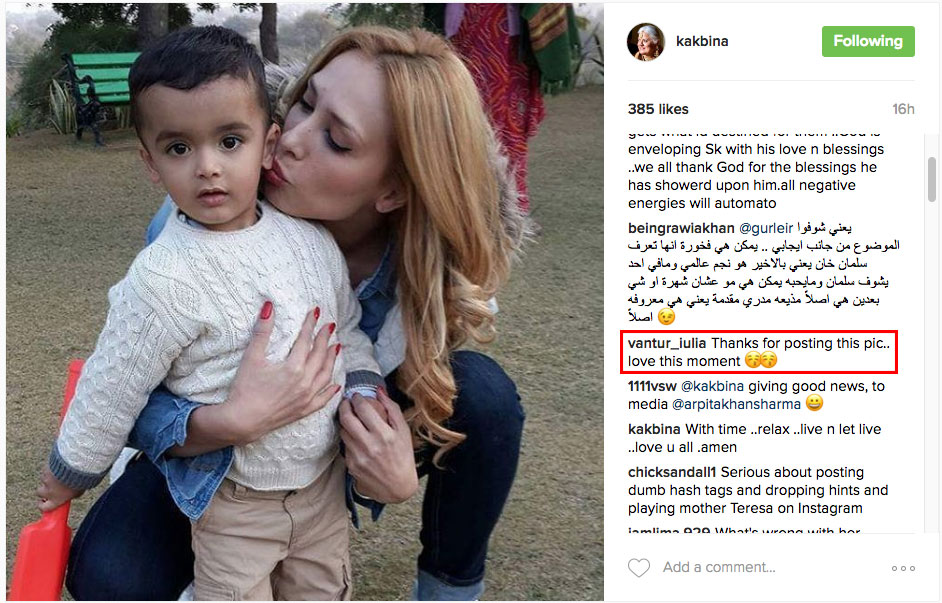 Meanwhile, the grapevine is abuzz with reports of the duo planning to get hitched by the end of this year and we too are eagerly waiting to see Salman getting married. Moreover, Salman’s wedding would be a talk of the town!

What do you think? Is it high time that Salman Khan should accept his relationship with Iulia and announce his marriage? Share your views in the comments section below!