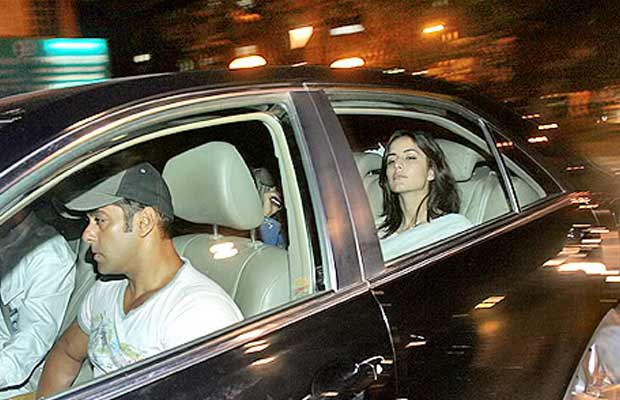 [tps_footer]Strangers at one point, Salman Khan and Katrina Kaif met in a party where the fireworks happened between the two and it didn’t take too long for Salman Khan to say it all to Katrina Kaif, “Tu hi toh meri dost hain“. That’s a sweet bond and understanding between the two that keeps them together whether they accept or deny or maintain silence on their relationship.

But somewhere it looks like Salman Khan is very happy to spend time with his rumoured ex girlfriend Katrina Kaif. And both of them barely miss out any opportunity to meet each other. It was also reported by sources that somewhere Katrina‘s closeness with Salman Khan has been a big reason for her alleged break up with Ranbir Kapoor after living in with him for six years but she straight away denied being in relation with Ranbir forget about accepting a break up. This Afghan jalebi is difficult to catch hold on.

After all of these ups and downs, Salman and Katrina still share a good rapport and are there for eachother at any point of time. And recently this love and never ending care and affection was seen again when Salman went to meet Katrina Kaif while she was promoting her movie “Fitoor” along with her on screen hero Aditya Roy Kapoor, but her off screen and eternal hero Salman Khan already had a plan to swipe away his lady love.. Oops !! Close friend.

During the shoot as well Katrina had put things on a hold to spend time with Salman and after the shoot got over, lover boy picked up Katrina Kaif in his car and they headed for a long drive, Katrina preferred sending her driver away and spent more time just with Salman Khan and enjoying the journey.

Looks like, something can still happen more than just “good friendship” between Salman Khan and Katrina Kaif. But what about Iulia Vantur, she always had issues with girls surrounding Salman Khan. She never enjoyed the presence of Daisy Shah, Elli Avram or Sangeeta Bijlani with Salman Khan. I wonder !! how is she going to digest this news.

On the other hand, Salman Khan tries his best to even avoid selfies with Iulia Vantur and from even taking her name but he never has any problem in showing his love for Katrina Kaif. Isn’t Salman making a clear choice of whom he still wants in his life ???[/tps_footer]