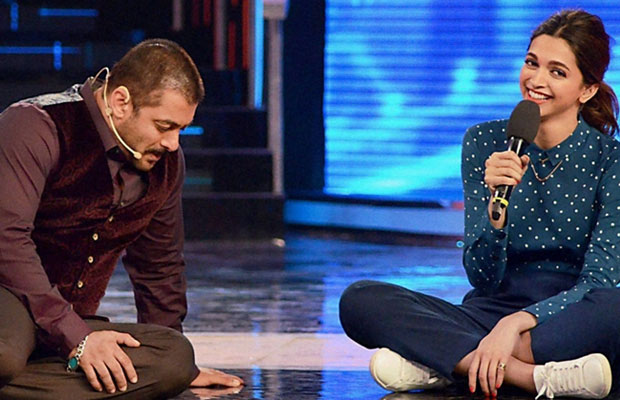 [tps_footer] Salman Khan and Deepika Padukone are much in the limelight for their onscreen pairing. The fans are eagerly waiting for the two celebs to star together in a film. Since a long time, Salman and Deepika have expressed that they want to work together in a movie. It was also reported that because of date issues the two actors could not commit to a film together.

Nevertheless, off the screen, these two talent bundles are now close buddies. Salman Khan and Deepika Padukone bonded amazingly during the IIFA this year. The mind blowing celebrities have loads to talk about now. Reports state that the Bajrangi Bhaijaan actor and the leggy lass were shooting at the same studio for their respective projects. The two top stars greeted each other and also had a long chat.

Surprisingly, Deepika and Salman Khan went on with their conversation for hours which gave a pain to Salman’s ad filmmakers. The onlookers suggest that both of them were discussing something important and their talks were never ending. Not to forget, Salman was shooting the ad opposite Jacqueline Fernandez.

The Sultan actor continued with the ad shoot only after Deepika left. We are now wondering what these two were chatting about. Reports state that Deepika is roped in for Kabir Khan’s ‘Tubelight’ opposite Salman. However, no official announcement for the same is yet made.

Apart from the stated, Salman is on cloud nine with the success of ‘Sultan’. The dashing actor is now gearing up for ‘Tubelight’. Deepika, on the other hand, will be seen in Sanjay Leela Bhansali’s ‘Padmavati’.