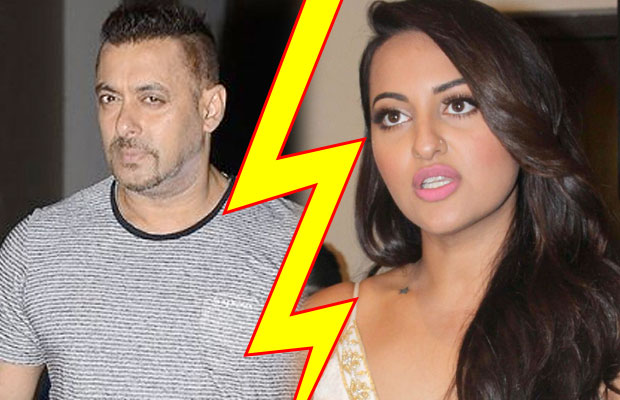 [tps_footer]Salman Khan is on cloud nine with the successful start of ‘Sultan’. The superstar has yet again broken all the records at the box office.  Salman is known for his moody behavior. Moreover, the actor also has a long list of enemies in the industry. Salman has always been vocal about his rapport with particular stars.

Lately, the Dabangg Khan is quite miffed with actress Sonakshi Sinha. Reports state that Salman is not happy with the actress and does not even want to work with her. Reportedly, the tiff started when Sonakshi refused Arbaaz Khan’s film ‘Dolly Ki Doli’. The close bond of friendship between Salman and Sona was already weak after the starlet rejected ‘Dolly Ki Doli’ offered to her by Salman.

Further, the two stars also had a fallout during Arpita Khan Sharma’s wedding. Since quite a long time Sonakshi and Salman are not in talking terms. Further, the Bajrangi Bhaijaan actor has also expressed that he does not want Sona to be a part of ‘Dabangg 3′.

Sonakshi Sinha who made her debut with ‘Dabangg’ was also a part of the sequel, but the actress will not be seen in the third installment. The makers of ‘Dabangg 3′ are now looking out for another actress to play the part.

Currently, Sonakshi is gaining all the limelight for the intriguing trailer of her film ‘Akira’, whereas Salman is on a success spree with ‘Sultan’. [/tps_footer]