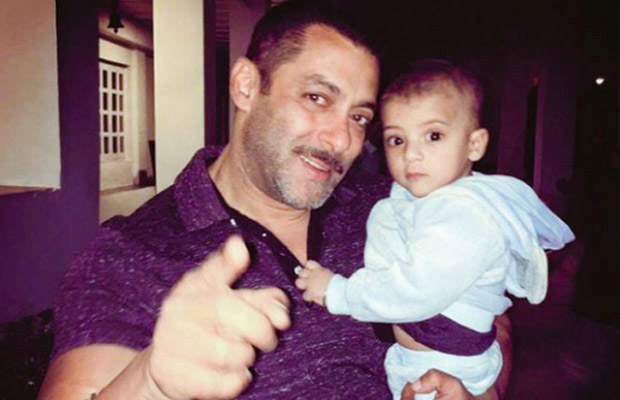 [tps_footer]Superstar of the Bollywood industry Salman Khan is a child at heart. The handsome looking actor who has millions of fans all across the nation is smitten by small babies. Salman has always been spotted with small kids here and there. Be it Harshaali Malhotra aka Munni from ‘Bajrangi Bhaijaan’ or any other child artist, the super actor is amazing with the kids.

Yet again, Salman Khan has raised the cuteness meter high with his adorable picture with a small child. The Dabangg Khan maybe tough in his movies, but is all caring and sweet when it comes to building a rapport with children.

Apart from the stated, the amazing star Salman Khan is gaining all the eyeballs for his hush hush meeting with ex-girlfriend Katrina Kaif. Well, it was being said that Salman and Katrina met for a secret talk and this meet came right after Katrina broke up with Ranbir Kapoor.

The Sultan actor also gained all the attention for his rumored girlfriend Lulia Vantur. Keeping mum about his marriage plans and love errands Salman seems to be enjoying these assumptions. The actor is currently busy with the shooting of his upcoming film ‘Sultan’. After loads of gung ho about the leading lady of ‘Sultan’, actress Anushka Sharma has been finalized for the same.

The year 2015 has been enormously successful for Salman with two blockbuster hits ‘Bajrangi Bhaijaan’ and ‘Prem Ratan Dhan Payo’. The actor is surely leaving no stone unturned for his film ‘Sultan’ too. Well, from hit blockbusters to rumored love, Salman Khan is undoubtedly unbeatable when it comes to ruling the headlines.

For now, we are content with Salman’s picture with the cute toddler![/tps_footer]