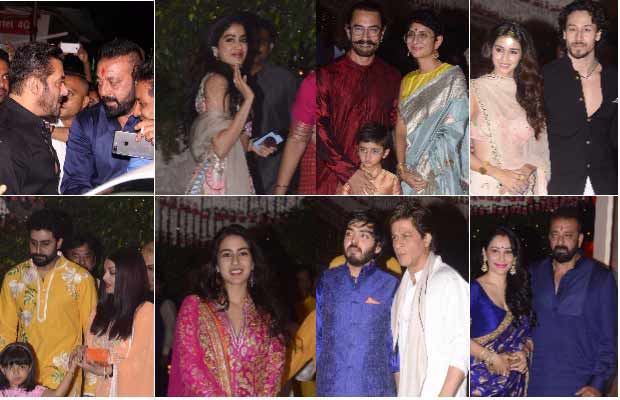 Salman Khan-Sanjay Dutt: Salman Khan’s meeting with Sanjay Dutt was the highlight of the Ambani’s bash. Since a year speculations have been doing rounds that all’s not well between Salman and Sanjay Dutt and reason was said to be because Ranbir Kapoor is doing Dutt biopic. However, the besties, surprised everyone as they hugged each other on arrival and even went on to pose together for the shutterbugs.

Salman-Aamir-SRK under one roof again: Salman Khan, Aamir Khan and Shah Rukh Khan were celebrating the festival under one roof. Yes, after very long time the three Khans were seen under one roof. However, could not be clicked together due to their appearance at different timings. Aamir Khan was also seen at the bash with his wife, Kiran Rao and son Azad Rao Khan

Ranveer Singh-Deepika together: And again! Deepika Padukone and Ranveer Singh gave us some adorable photos once again at Ambani’s Ganpati celebrations. The two looked adorable together like always in their best traditional avatars.

The Bachchan family: Aishwarya Rai Bachchan, Amitabh Bachchan, Abhishek, Jaya and little Aaradhya were seen in their best royal appearances. Well, the Ambanis events are incomplete without the presence of megastar Amitabh Bachchan.

Tiger Shroff-Disha Patani: Alleged couple Disha Patani and Tiger Shroff looked absolutely wonderful together. The two arrived together and also posed for the shutterbugs. Tiger looked dapper in Indo-western look while Disha was all decked up in her best traditional outfit.

The Kapurs: Vidya Balan was seen posing for shutterbugs with her hubby Sidharth Roy Kapur and his handsome ‘devar’ Aditya Roy Kapur.